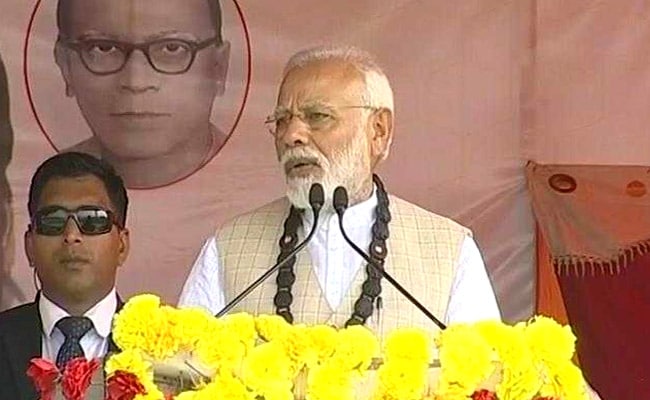 From a packed ground in West Bengal’s Thakurnagar, Prime Minister Narendra Modi today kick started his campaign in the state for the Lok Sabha elections, due by May. In a short address lasting only 14 minutes, he seemed to cut short his speech because of a stampede in the crowd, wrapping up after a brief mention of the Citizenship (Amendment) Bill and urging the Mamata Banerjee-led Trinamool Congress government to support it in Rajya Sabha.

Reports coming in after he left the venue suggest several people, including women, suffered some injuries.

“After Independence, many people stayed where they were. But after being tortured, they left and came back to India. They had to as Hindus, Sikhs, Parsis and Christians have nowhere else to go but India. And that’s why we are bringing the citizenship law. I urge the Trinamool to support it in parliament. My brothers and sisters here need it,” the PM said.

Thakurnagar as the first venue for PM Modi’s rally holds political significance. It is the hub of the sizeable Matua community, which originally is from erstwhile East Pakistan and began migrating to West Bengal in the beginning of the 1950s mostly due to religious persecution. The rally venue was near the house of Matua matriarch Binapani Debi, also called Boroma.

Matuas with an estimated population of 30 lakh in West Bengal — the mahasangh claims 3 crore — have influence in at least five Lok Sabha seats in North and South 24 Parganas districts. Not only are they refugees, they are also a scheduled caste community with impact beyond Bengal.

PM Modi also spoke about the measures announced for farmers in the interim budget yesterday and said that farmers with up to five acres of land will be provided Rs 6,000 assistance in three equal instalments directly in their bank accounts.

The PM will next address a rally in Durgapur, which will be a part of the BJP’s ‘Ganatantra Bachao’ (save democracy) programme in the state. The industrial hub of Durgapur is near the Asansol Lok Sabha constituency held by union minister Babul Supriyo.

The rallies come just weeks after Mamata Banerjee organized a mega opposition rally in the state, which was attended by leaders of 24 parties from across the country calling for the BJP-headed government at the Centre to be ousted.