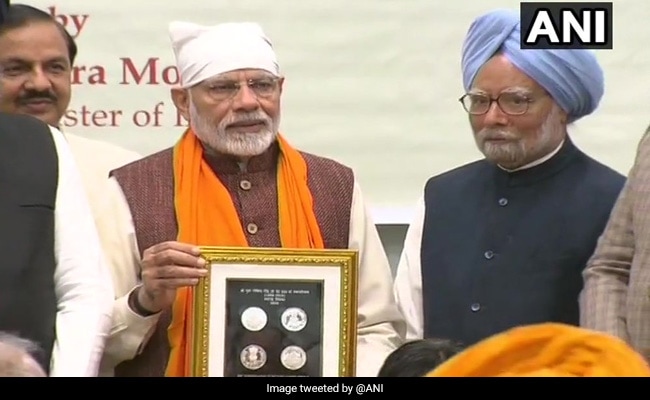 PM Modi, after releasing the coin, said that the verses of Guru Gobind Singh ji is an “inspiration… and the simple expression of our lives.”

“Just as his (Guru Gobind Singh) personality was multi-faceted, his poetry also covered many different subjects,” the Prime Minister said.

“India is a storehouse of knowledge and all efforts are being made to spread it to all corners of the world,” said PM Modi.

Raising the issue of Kartarpur Corridor during his speech today, PM Modi, said that followers of Guru Nanak ji now won’t have to look through a telescope for darshan (view) of Gurdwara Darbar Sahib, a revered Sikh shrine, where Guru Nanak Dev spent 18 years of his life.

Taking a potshot at the Congress, PM Modi said that the “mistake” of 1947 has been rectified. “The most significant Sikh shrine was just a few kilometres away but even then it was ignored,” said PM Modi and added that as an “atonement”, the central government is helping build the road link to Kartarpur.

Earlier in December, while campaigning for the Assembly elections in Rajasthan, PM Modi had said that “correcting Congress’ mistakes was my destiny.” He alleged that Congress leaders at the time had “no idea about the importance of Guru Nanak Dev” and no respect for Sikh sentiment.

During the inauguration of the corridor in Pakistan, union minister Hardeep Singh Puri, also had blamed the cartographer who made the boundary line, calling it a “fundamental mistake.”