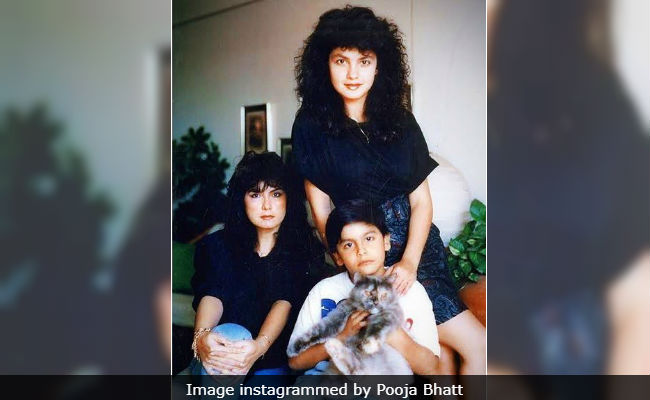 Pooja Bhatt is spitting image of her mother in the latest throwback Thursday post, the actress filmmaker shared on social media. “One from the family album! Shot at our Green Acres home in Pali Hill. That’s me with my gorgeous Mother, my brother Rahul and Zee-Zee, our cat,” Pooja Bhatt wrote. In the picture, Pooja Bhatt poses with her mother Kiran (born Loraine Bright), who sat next to Rahul Bhatt holding the family cat. Pooja Bhatt looks exactly like her mother in the photo, which appears to be taken shortly after Pooja debuted in Bollywood. The Internet was taken aback with Pooja’s acute similarity to Kiran Bhatt. “Oh my god… seeing your mom’s pic for the first time… I couldn’t recognize which one is you,” wrote a fan in comments section.

Pooja and Rahul are Mahesh Bhatt’s children with his first wife Kiran. Mahesh Bhatt married Loraine Bright in 1968 when he was 20-years-old. She changed her name to Kiran after their wedding. Their marriage reportedly ended after Mahesh Bhatt’s alleged affair with actress Parveen Babi.

Mahesh Bhatt later married actress Soni Razdan in 1986. They are parents to Shaheen and Alia Bhatt, who is a successful actress and has featured in films such as Raazi, Highway, Humpty Sharma Ki Dulhania and Udta Punjab among others.

Pooja Bhatt started her Bollywood career with 1990 film Daddy and she went on star in critically acclaimed films like Sadak and Dil Hai Ki Manta Nahin. She directed her fisrt film – Paap – in 2003.