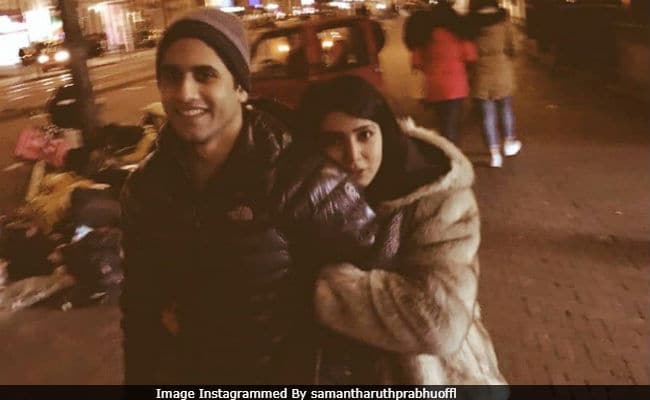 The pictures from celebrity couple Samantha Ruth Prabhu and Naga Chaitanya‘s New Year’s vacation is simply stunning. They arrived like a delightful treat on Monday and drove away all our Monday blues. Samantha treated her Instafam to wonderful loved-up pictures, giving a sneak peek of the fun they had. “Great trip,” is how she summed up her holiday with Naga Chaitanya and friends. We simply loved how Samantha described a picture of herself with Naga Chaitanya, in which they have been photographed in what appears to be a market place. Samantha rests her face on Naga Chaitanya’s shoulder and holds him. “Strolling into the New Year… 2019. Great expectations,” she wrote. In another photo, they share a hearty laugh. “The way you laugh,” she captioned it, adding a heart emoticon.

Now, without much ado, here are the pictures from Samantha Ruth Prabhu and Naga Chaitanya’s New Year’s vacation.

On Christmas, Samantha shared this picture.

Here’s how she wished Naga Chaitanya on his birthday.

Samantha Ruth Prabhu and Naga Chaitanya had a two-part destination wedding in Goa in October 2017. They first married according to Hindu rituals and later had a Christian wedding.

On the work front, they are currently looking forward to the release of Majili. The first poster of their film was released in December.

The couple first co-starred in Ye Maaya Chesave and then made three films together – Vinnaithaandi Varuvaayaa, Thrayam, Autonagar Surya and Manam.