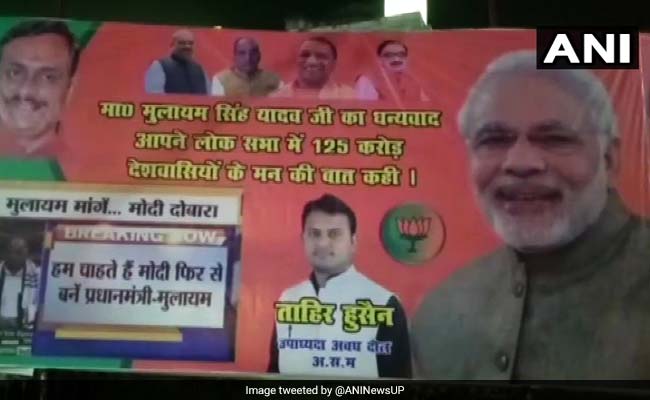 After Samajwadi Party patriarch Mulayam Singh Yadav praised Prime Minister Narendra Modi and said that he hopes to see him back in power after the general elections this year, posters thanking the former Uttar Pradesh Chief Minister appeared in Lucknow on Wednesday.

“Thank you Mulayam Singh Yadav, today you reiterated the wish of 125 crore Indians in the Lok Sabha,” one poster read.

In a surprising statement which left the many in the opposition amazed, Mr Yadav in the Lok Sabha said he wished to see Prime Minister Narendra Modi re-elected. Congress leader Sonia Gandhi, sitting next to Mulayam in the Lok Sabha, looked visibly surprised.

The 79-year-old Uttar Pradesh leader’s comments came at a time when his son and Samajwadi Party chief Akhilesh Yadav has been seen supporting opposition leaders in their efforts to forge an anti-BJP alliance to oust Prime Minister Modi-led government from the centre.

In January, the Samajwadi Party and the Mayawati’s Bahujan Samaj Party forged an alliance ahead of the Lok Sabha polls, raising a formidable challenge for the ruling BJP at the centre. Among all states, Uttar Pradesh has the highest number of 80 Lok Sabha seats and plays a crucial role in government formation at the centre.