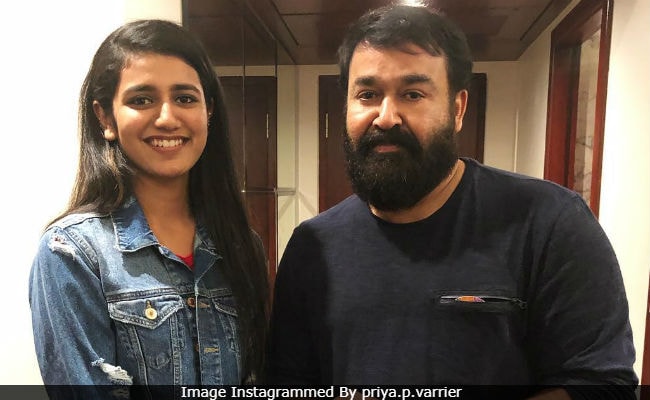 On Thursday, Malayalam actress Priya Prakash Varrier treated her Instafam to a picture of herself with superstar Mohanlal. “Is this even real? Been pinching myself since the day this happened. I consider myself the luckiest to have met this legend and spent a few minutes with him,” read an excerpt from Priya’s post. Going by the caption, the picture appears to be an old one, but their fans are really delighted to see them together in one frame. “Super” and “that must have been an amazing meeting” are some of the comments on the picture, which has been liked over 1.4 lakh times in just an hour. “I am humbled that I got to touch his feet and seek his blessings for all my future endeavours,” Priya Prakash Varrier added.

Priya Prakash Varrier became an Internet sensation last year with a wink, after a video clip of hers from Malayalam film Oru Adaar Love went insanely viral. The Internet was utterly smitten with her wink. Earlier this month, she was invited to Vicky Kaushal’s Uri: The Surgical Strike screening in Mumbai, where she met stars like Ranveer Singh, Varun Dhawan and others.

She recently featured in headlines for the film Sridevi Bungalow. Filmmaker Boney Kapoor, husband of late actress Sridevi, had sent a legal notice to the team, reportedly over the film’s title.

Meanwhile, on the work front, Mohanlal, last seen in Odiyan, is currently filming Lucifer and Marakkar: Arabikadalinte Simham simultaneously. He also has Tamil film Kaappaan in the pipeline.