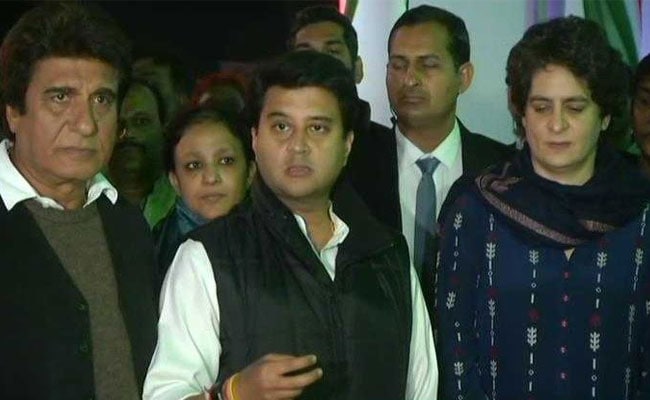 Priyanka Gandhi Vadra and Jyotiraditya Scindia, Congress chief Rahul Gandhi’s new lieutenants in Uttar Pradesh, today announced an alliance with regional outfit Mahan Dal. The two leaders had taken charge earlier this week and have been working on a list of candidates for the state in the coming national elections. The Congress is contesting all 80 Lok Sabha seats in Uttar Pradesh.

Facing the cameras for the first time since taking charge, Priyanka Gandhi said, “We want to work hard and fight for the coming elections with our full might”.

The 47-year-old has been put in charge of eastern Uttar Pradesh – the 41 constituencies in her share include Prime Minister Narendra Modi’s Varanasi, Chief Minister Yogi Adityanath’s stronghold Gorakhpur and the Gandhi family boroughs of Amethi and Rae Bareli.

The mother-of-two, who had confined herself to campaigning in the family strongholds of Amethi and Rae Bareli so far, held a marathon 16-hour meeting with local leaders of the party to get acquainted with the ground situation in her area.

Introducing Keshav Dev Maurya, the chief of Mahan Dal, Jyotiraditya Scindia said, “Whatever is the vision of Rahul, Sonia and Priyanka Gandhi, to support it… Mahan Dal will work with us in this battle”.

“Today Keshav Maurya ji has joined the Congress to support the party in its pursuits… We welcome him to the party and hope he would support us,” Mr Scindia added.

During Monday’s mega rally in Lucknow, both Priyanka Gandhi and Jyotiraditya Scindia had maintained silence. Rahul Gandhi had addressed the crowds both before and after the rally. Senior party leaders said it was a convention that younger leaders of the party maintain silence when the party chief speaks.

The Congress and the Mahan Dal contested the 2009 Lok Sabha elections, Mr Maurya said. “It was unfortunate that we did not fight the last Vidhan Sabha elections together,” added the leader whose party has some presence in western Uttar Pradesh. Mr Scindia is in charge of the area.