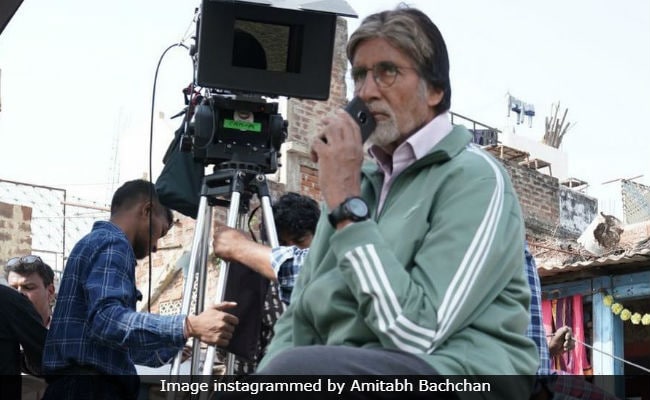 The shooting of megastar Amitabh Bachchan’s next project and a commercial, featuring cricketers Virendra Sehwag, Harbhajan Singh and Suresh Raina, was voluntarily stopped for two hours on Sunday in Mumbai due to a protest against the terror attack in Jammu and Kashmir’s Pulwama.

In the wake of the terror attack on a CRPF convoy that killed over 40 soldiers, 24 film associations, including Federation of Western India Cine Employees (FWICE) and Indian Film and Television Directors’ Association (IFTDA), staged a protest at Filmcity in Goregaon.

Virendra Sehwag, Harbhajan Singh and Suresh Raina and VVS Laxman, among others, were shooting for a commercial in Filmcity when they joined the protest to show their solidarity. “Whatever we say or do will perhaps be less for the soldiers and their daily. We can only thank them and should do whatever can to help them. We are pained but are hopeful for a better time for all of us in the future,” Sehwag said.

Harbhajan said he hopes the sacrifice of the soldiers does not go in vain. “These are tough times but let’s stay united so that they aren’t able to break us. I’m grateful to all the soldiers who protect us around the clock. Cricketers, actors aren’t heroes. The real hero of the nation is our soldier,” Harbhajan said.

The protest saw participation from major film bodies and the association of cinematographers, make up men, costumes, junior artists, editors, fighters and dancers.

Casting director-filmmaker Mukesh Chabra, actor Nia Sharma, Isha Kopikar and others were also present at the protest to show their solidarity. According to sources, Amitabh Bachchan was shooting for Brahmastra at the venue.

BN Tiwari, president of Federation of Western India Cine Employees (FWICE), told PTI that all the film bodies have decided to “completely boycott” any Pakistani artiste working in Hindi films. “We won’t let any film release which has even a song by any Pakistani singer, forget about actors. We will take strong action if we come to know anything.”

President of IFTDA, Ashoke Pandit, echoed a similar sentiment and said the film bodies have decided to boycott Navjot Singh Siddhu. Sidhu, who appears on The Kapil Sharma Show, had condemned the incident but courted a controversy when he asked whether an entire nation can be blamed for a handful of people.

Over 40 CRPF soldiers were killed when a suicide bomber rammed a vehicle laden with explosives into their bus on Thursday. The Pakistan-based terror group Jaish-e-Mohammed (JeM) has claimed responsibility for the attack on the convoy of 78 vehicles that was on its way from Jammu to Srinagar.