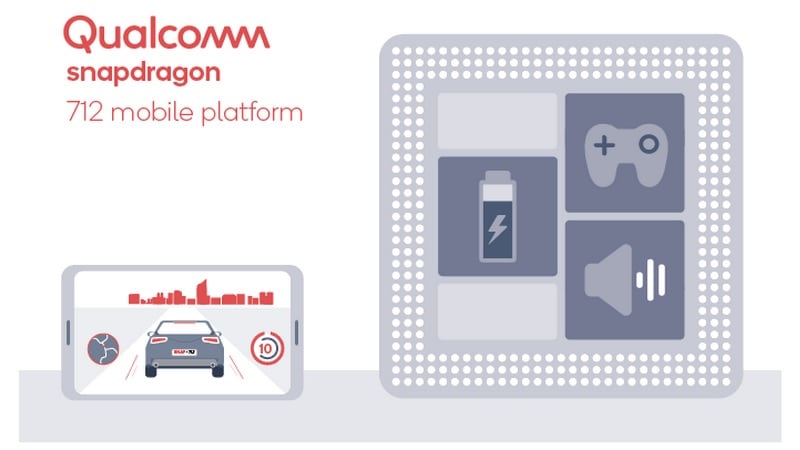 The new Qualcomm SoC utilises the Snapdragon X15 LTE modem which facilitates fast download speed of up to 800Mbps over Cat. 15 LTE standard and uplink speed of up to 150Mbps over Cat. 13 LTE connectivity. The Snapdragon 712 SoC comes with the Spectra 250 ISP that has support for up to 20-megapixel dual cameras or a single 32-megapixel single camera, while facilitating 4K video capture at 30fps and full-HD video recording at 120fps. When it comes to media playback, the latest Qualcomm offering has support for 4K Ultra HD video playback on an HDR 10-supported display with a maximum resolution of QHD+ (1440×3360 pixels). Qualcomm Aqstic audio technology handles the audio department and is further backed by Qualcomm aptX for more refined music playback over wireless headphones.

The Snapdragon 712 also benefits from the Qualcomm AI engine which is claimed to automatically adjust UI preferences based on usage pattern to help in scenarios like clicking images or shooting videos. It also employs what Qualcomm calls heterogeneous computing for more handling resource allocation, system optimisation and thermal management during intensive usage. There is support for Bluetooth 5.0 and tri-band Wi-Fi for wireless connectivity, while the Qualcomm Hexagon 685 DSP handles on-device automation processes for more efficient power management as well as usage optimisation.