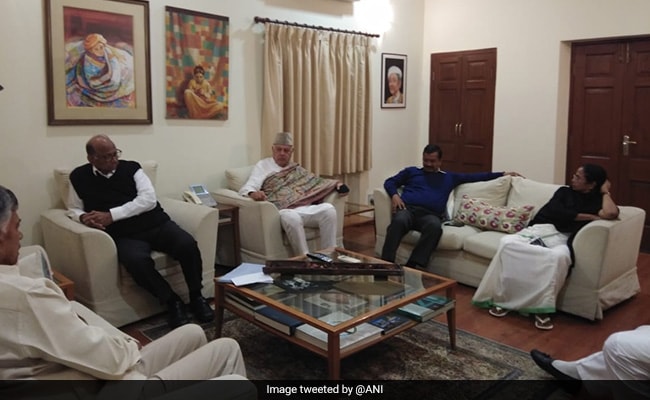 Rahul Gandhi, Mamata Banerjee and Arvind Kejriwal starred in an opposition meeting in Delhi this evening that decided on a pre-poll alliance to take on Prime Minister Narendra Modi and the ruling BJP in the national election. “We will have a pre-poll alliance to remove Modi. Pre-poll alliance so there is no difficulty afterwards,” Ms Banerjee said after a 15-party meeting at NCP leader Sharad Pawar’s Delhi home.

The Bengal Chief minister, however, said the question of alliance in Bengal and Delhi has “not been decided yet”.

Rahul Gandhi’s comment confirmed the lingering contradiction in states where his Congress party is a rival to both Mamata Banerjee’s Trinamool Congress and Delhi Chief Minister Arvind Kejriwal’s Aam Aadmi Party. “We will compete with each other as well,” Mr Gandhi said, indicating that his party is willing to go it alone in both states.

The three leaders are expected to work closely together despite their earlier differences, to form a united front against the BJP in the coming general elections.Discussions are also on for a Common Minimum Programme, Ms Banerjee said after the meeting, which took place after a day-long show of strength at Delhi’s Jantar Mantar. The opposition parties, she added, will meet every 15 days to fine-tune their strategy.

Sources said part of the discussion was on a possible alliance between Mr Kejriwal’s party and the Congress in Delhi. While the two parties are known for their political rivalry, the opposition leaders are arguing that a lack of an alliance in Delhi is likely to harm the unity agenda, sources said.

Delhi has seven Lok Sabha seats, all of which were won by the BJP in the 2014 national elections. But in the subsequent assembly election, Mr Kejriwal’s party had won big. The Aam Aadmi Party swept the 2015 elections, while the Congress drew a blank.

The Congress-AAP dynamics had been skewed from the beginning, with Mr Kejriwal’s party being an offshoot of the anti-corruption movement of Anna Hazare that had targeted the Congress government in Delhi led by Sheila Dikshit.

Still, the two parties had entered a partnership in 2013, which ended with Mr Kejriwal’s 49-day tenure as Chief Minister.

The parties, which have been at loggerheads since, had to re-calibrate their stance after persuasion from opposition leaders — Andhra Pradesh Chief Minister N Chandrababu Naidu, DMK chief MK Stalin and CPM’s Sitaram Yechury. Co-opted into the united opposition, Mr Kejriwal even shared stage with Rahul Gandhi.

The mega rally today was attended by leaders of 15 parties — way below the 23 that had attended Ms Banerjee’s January 19 rally in Kolkata. The other opposition leaders attending the meet include Mr Naidu and National Conference chief Farooq Abdullah.

The big political statement of the day had come from Ms Banerjee, who said she would fight along with bitter political opponents the Congress and the Left to take on the BJP in the general elections.