​Real Madrid stars Sergio Ramos and Luka Modrić have offered different explanations for their shock 2-0 loss to Real Sociedad on Sunday, with the former pointing the blame at the referee, while the latter felt the responsibility lay with the team.

Los Blancos were stunned by their mid-table opposition on Sunday, who pulled off a surprise win at the Bernabéu that left the home fans incensed at the final whistle. It was a controversial encounter, with Real Madrid having an appeal for a penalty turned down in the second half, and the referee refusing to check VAR to ensure his decision was correct. 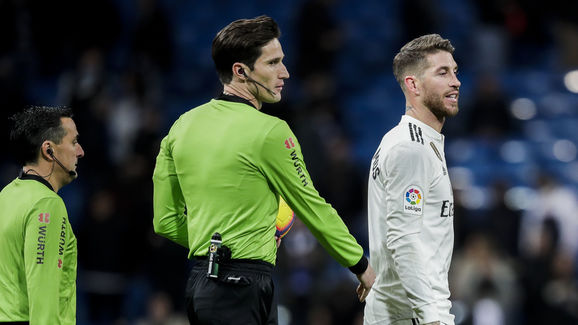 Speaking after the game, via the Mirror, ​Real Madrid captain ​Ramos said: “The referee played a big role in things. I’ve always defended the VAR system, but it has to be improved because what we’ve seen was scandalous. He could have awarded the penalty and then consulted the VAR. After seeing the penalty incidents in the dressing room, all we ask for is fairness.

“There are times when we’re punished for our behaviour on the pitch and the referees’ committee should do the same with the officials. The VAR is in place but you’ve got to know how to use it and consult it. We’re motivated and fighting for a ​La Liga title that’ll be tough and it’s made all the more difficult when things like this happen.” Conversely, while acknowledging some disgruntlement with the referee, Modrić claimed (via Marca) the team needed to admit their fault in the defeat, and said: “He (the referee) has not had a good day. But our problem is not the referee or VAR, although they haven’t helped us. Our problems are other things.

“Many of us are not at our level. We cannot take a s*** at the beginning of every game. We have to be clear, it’s not a matter of luck. We are creating a lot but the ball won’t go in and we are giving a lot but there are reasons that explain why things are not going well.”

Los Blancos’ loss saw them slip even further behind Barcelona in the title race, and are currently fifth in the La Liga table – ten points behind the Catalan league leaders.

My teenager doesn't want to step out to play

Mason Mount Reveals How He Does Extra Shooting Training With Chelsea...