Realme’s existing smartphone portfolio are all based on Android 8 Oreo but back in November, the company confirmed that it will be bringing the Android 9 Pie update to its lineup soon. Now, a listing on benchmarking platform Geekbench shows the Realme 2 Pro running on Android 9 Pie, hinting that we could expect an official OTA update for this and possibly other phones too, soon.

The phone in question got a single-core score of 1453 points and a multi-core score of 5438 points. To recall, Realme had last month announced its Android 9.0 Pie update plans for its entire range of smartphones in India, and had given a timeline of Q1 or Q2 of 2019. The Android 9.0 Pie update would also bring slow-motion video recording alongside, the company had revealed at the time. 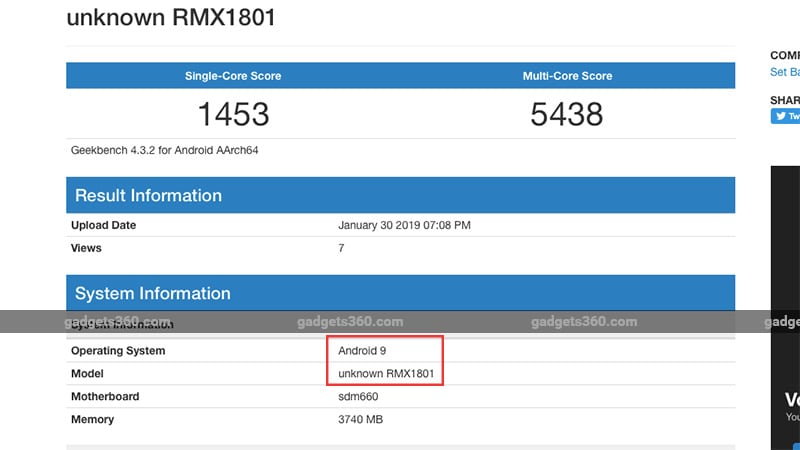 Apart from an update to Android 9 Pie, Realme also promised users the ability to unlock the bootloaders of the Realme 2 Pro and the Realme 1, which the company delivered on January 15. The company has also jumped in the mobile accessories business and its first product is the recently launched Realme Buds wired earphones.

To recall some of the specifications of the Realme 2 Pro, the dual-SIM smartphone sports a 6.3-inch full-HD+ display with 19.5:9 aspect ratio. It is powered by a Snapdragon 660 SoC, paired with 4GB, 6GB, and 8GB RAM options. It has a 16-megapixel sensor on the back and a 2-megapixel secondary depth sensor. There is a 16-megapixel sensor at the front for selfies. The Realme 2 Pro is equipped with 64GB and 128GB inbuilt storage options, both of which are expandable via microSD card (up to 256GB). Also, it packs a 3,500mAh battery.