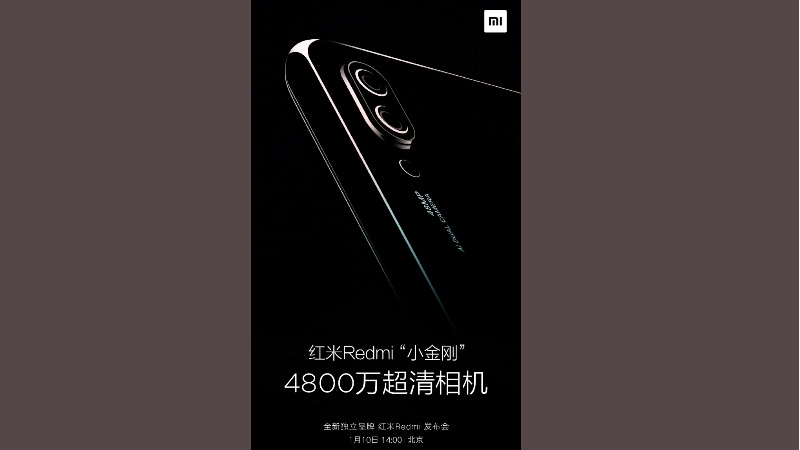 Xiaomi’s upcoming Redmi phone has been teased yet again, just a day ahead of the scheduled launch. Xiaomi CEO Lei Jun recently shared photos of the device as well, and the company has even partnered with Tik Tok for the event tomorrow. This new teaser reiterates the back panel design, and again confirms that the Redmi phone will come with a 48-megapixel sensor. The upcoming Redmi phone is speculated to be called the Redmi Note 7, Redmi 7, or Redmi Pro 2.

The Redmi page on Weibo has posted a new teaser that outlines the back of the device. It confirms that the smartphone will sport a dual rear camera setup aligned vertically, and one of the sensors will be at 48-megapixel. The teaser also reiterates that the phone will launch on January 10. It looks a lot like the recently launched smartphone – Xiaomi Play.

Based on Jun’s photos yesterday, the phone is set to come in at least three colour options – Black, Blue, and Pink. The latter two should come in gradient finishes, while the former will sport a matte finish. A phone called Redmi X has also been listed on JD.com with an asking price of CNY 9,999 (roughly Rs. 102,300 ) for pre-booking before the launch.

Most recent leaks suggest that the Redmi Note 7 will launch at the event. It is tipped to run on Android 9 Pie, be powered by the Snapdragon 660 octa-core SoC, and pack 6GB RAM. Whatever it may be called, the first Redmi phone after the sub-brand announcement is expected to be priced aggressively and be online exclusive.