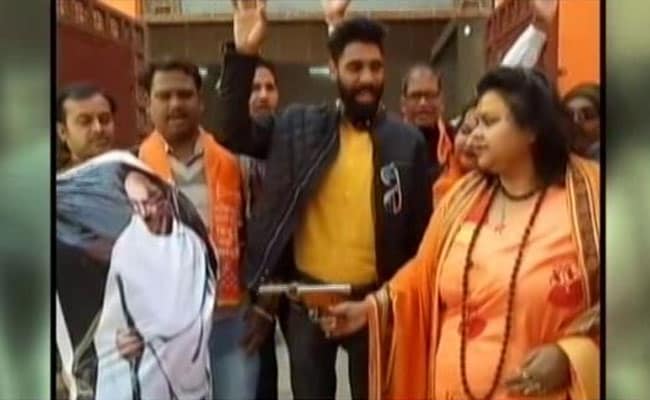 Hindu Mahasabha leader Pooja Shakun Pandey, missing since she alongwith members of the right-wing group enacted the assassination of Mahatma Gandhi on his death anniversary last week, was arrested on Tuesday from Uttar Pradesh’s Aligarh. Her husband, Ashok Pandey, was also taken into custody, the police said.

The Uttar Pradesh police have registered criminal cases against 12 people in connection with the shocking recreation of Gandhi’s assassination by the right-wing group. Last week the police had arrested three others, who were seen in the video.

A video showing Pooja Shakun Pandey – wearing saffron – shooting at an effigy of Mahatma Gandhi with an air pistol and garlanding his assassin Nathuram Godse on January 30 had sparked outrage. The Hindu Mahasabha general secretary had told reporters that her organisation had started a new tradition and it would be an annual event “just like the burning of Raavan on Dussehra”.

The right-wing group regards the day of Mahatma Gandhi’s death as Shaurya Divas (Bravery Day), in honour of Nathuram Godse. The right-wing activist was one of the early members of the organisation, founded by Madan Mohan Malaviya in 1915.

This is not the first time the Hindu Mahasabha has tried to glorify Nathuram Godse. In 2015, the group’s leader, Swami Pranavananda had announced plans to install statues of Nathuram Godse across six districts of Karnataka. He also described the assassin as a “patriot” who had worked with the blessings of Hindu nationalist Vinayak Damodar Savarkar.