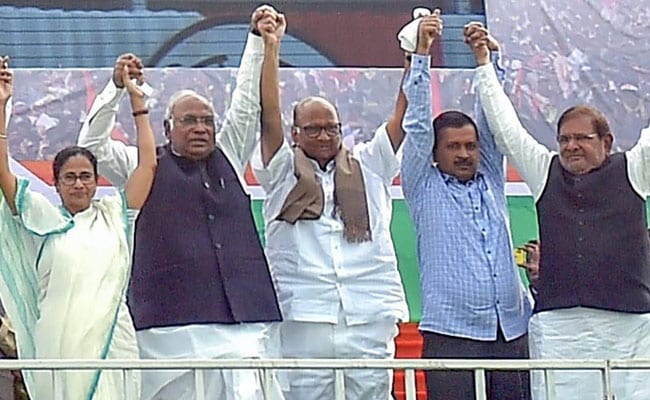 After sharing stage for Mamata Banerjee’s mega opposition rally on Saturday, the Congress and the Aam Aadmi Party (AAP) – sworn rivals in Delhi – are in for a tight squeeze on a four-party “election committee” asked to work on strategy to take the campaign forward.

The group of four, with a leader each from the Samajwadi Party, the Bahujan Samaj Party, the Congress and AAP, is tasked with taking the 23-party unity show beyond symbolism in the campaign for the national election, due by May. Samajwadi Party leader Akhilesh Yadav, Congress’s Abhishek Manu Singhvi, BSP’s Satish Mishra and AAP leader Arvind Kejriwal are its members.

For the Congress, it is an uncomfortable foursome; besides persistent baiter AAP, the others are the rivals-turned-allies who decided to keep Rahul Gandhi’s party out of the Uttar Pradesh gathbandhan or grand coalition declared earlier this month.

The election committee is described by leaders as a “first step” in their mission to oust the BJP. The choice of members is bound to raise eyebrows, leaders admit, but they say it may be the best way to get rid of the cobwebs.

On the panel’s agenda is election reforms, including optimal use of Electronic Voting Machines (EVMs), which opposition parties allege has been manipulated by the ruling BJP in polls. Many in the rally had called for the scrapping of the machines in the upcoming Lok Sabha election.

Mamata Banerjee’s opposition unity party created a huge buzz as leader after leader hit out at Prime Minister Narendra Modi and the BJP. Ducking the tricky subject of a prime ministerial candidate, the Bengal Chief Minister called for “collective leadership”.

On Sunday, PM Modi took a swipe at the rally and said opposition leaders’ only refrain was “bachao, bachao, bachao (help)”. Congress president Rahul Gandhi hit back with a tweet saying those were cries for help of jobless youth, farmers in distress, persecuted minorities and small businessmen for freedom from tyranny.

The United India parties appear to have taken a decision not to react to the Prime Minister’s jibes.