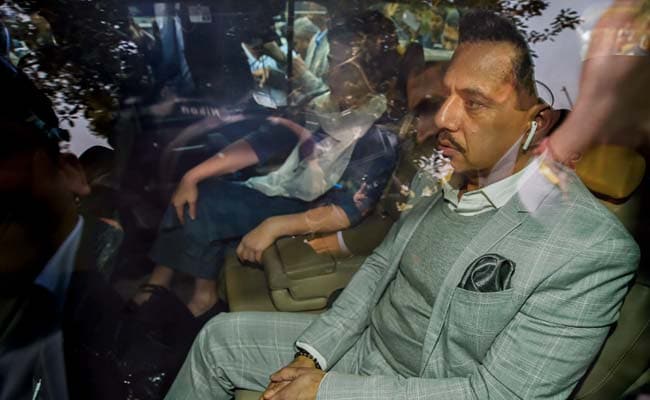 Businessman Robert Vadra, who was questioned today for more than five hours by the Enforcement Directorate, has denied owning properties in London or knowing any of the people the agency says were involved in the deals, sources said.

The brother-in-law of Congress chief Rahul Gandhi was quizzed today in a money laundering case after a court asked that he join the investigation. The 49-year-old, who was dropped to the central Delhi office of the agency by wife Priyanka Gandhi Vadra, has got immunity from arrest till February 16. He has called the cases against him a political witch-hunt. He left the agency’s office close to 10 pm, nearly six hours after he went inside.

The case involves nine London-based properties allegedly owned by Mr Vadra worth several million pounds. Three of these are villas, the rest luxury flats purchased between 2005 and 2010.

Sources said Mr Vadra has denied any association with absconding arms dealer Sanjay Bhandari and his cousin Summit Chadha, key to the case. He has also denied that he directly or indirectly owns properties in London.

He has admitted to knowing Manoj Arora, a former employee of a firm linked to him, Skylight Hospitality LLP. He has, however, denied that Manoj Arora ever wrote any e-mail on his behalf, sources said.

Agency sources earlier said Mr Vadra was to be confronted with Manoj Arora’s e-mails and statement in the case.

The money laundering case was initially filed against Manoj Arora, whose role was detected during the investigation in another case against Sanjay Bhandari, by the Income Tax Department, the Enforcement Directorate had told the court.

The agency alleged that a London-based property was bought by Sanjay Bhandari for 1.9 million pounds and sold in 2010 for the same amount, despite an additional expense of approximately 65,900 pounds for its renovation.

“This gives credence to the fact that Bhandari was not the actual owner of the property but it was beneficially owned by Vadra, who was incurring expenditure on the renovation of this property,” the ED had told the court.

Manoj Arora, sources said, was a key person in the case and he was aware of Mr Vadra’s overseas undeclared assets and was instrumental in arranging funds, the ED had alleged.

The questioning of Mr Vadra, coming days after Priyanka Gandhi Vadra entered active politics, has helped the BJP sharpen its attack on the Congress.

Alleging that corruption has been the “core agenda” of the Congress party, BJP’s Sambit Patra said, “Everybody knows every member of the family is out on bail”.

“The 2019 Lok Sabha election is a fight between the gang of corrupt versus transparency of Narendra Modi government,” he said.