Alok Verma, removed as CBI director on Friday, resigned and refused to take charge as chief of fire services a day after he was removed from the high-profile investigating agency by a panel led by Prime Minister Narendra Modi.

The panel had transferred him as Director General Fire Services, after deciding that as CBI chief, he had “not acted with the integrity expected of him”.

Alok Verma was to retire on January 29. “Natural justice was scuttled and the entire process was turned upside down in ensuring that the undersigned is removed from the post of the Director,” he said in a statement.

Mr Verma was removed just two days after the Supreme Court reinstated him as CBI chief. In October, he had been sent on forced leave by the government in a midnight swoop in which officers of his team were transferred and an interim director took over.

Mr Verma challenged the decision in the Supreme Court, arguing that he had a fixed two-year tenure and only the PM-led selection panel could remove him. The court cancelled the government’s order but said the selection panel must decide on his status, based on a vigilance report on allegations of bribery raised by his number two officer, Rakesh Asthana.

In the three-member panel, Justice AK Sikri – nominated by Chief Justice Ranjan Gogoi who had recused himself – voted with PM Modi for Mr Verma’s removal. Congress’s Mallikarjun Kharge, representing the opposition, put up a dissenting note saying that the vigilance inquiry had not found evidence that Mr Verma was guilty of bribery.

The opposition has questioned the process, wondering why Mr Verma was not allowed to present his case before the panel.

Following is the full text of Alok Verma’s resignation letter: 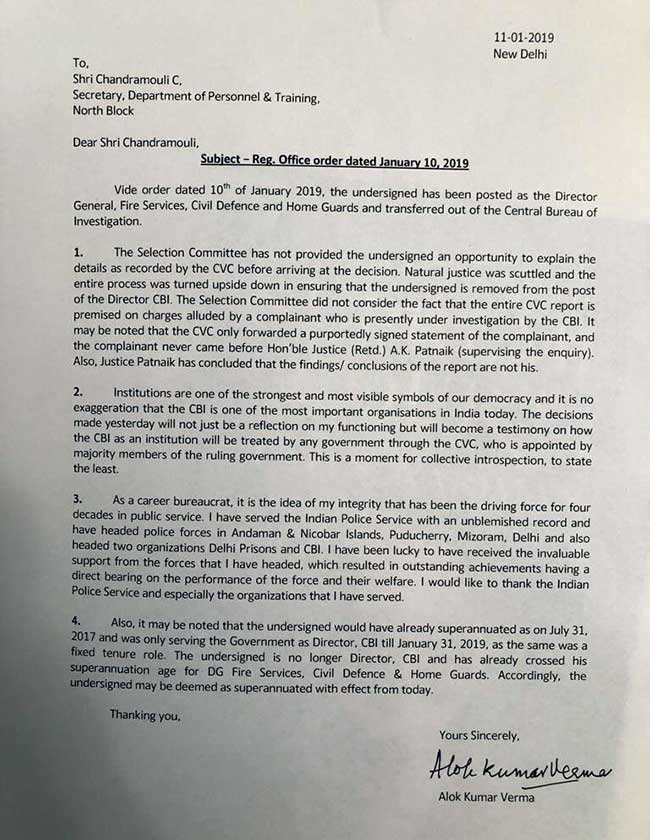