Saina Nehwal has widely been seen to lean towards the BJP with her tweets praising the PM.

Badminton champion Saina Nehwal joined the ruling BJP today and is likely to campaign for the party ahead of the February 8 Delhi election.

“I draw a lot of inspiration from Narendra sir”.

Haryana-born Saina Nehwal, 29, is a major acquisition for the party in the middle of the Delhi poll campaign; she is one of the most popular sportspersons in India with a huge fan following and brand value. She is preparing for the 2020 Tokyo Olympics.

A former world number 1, she has been honoured with the country’s top sporting awards like the Rajiv Gandhi Khel Ratna and Arjuna Award. She was also awarded the Padma Bhushan in 2016.

The Badminton player has won over 24 international titles. In the London Olympics, she won a bronze. She was world number two in 2009 and number one in 2015. 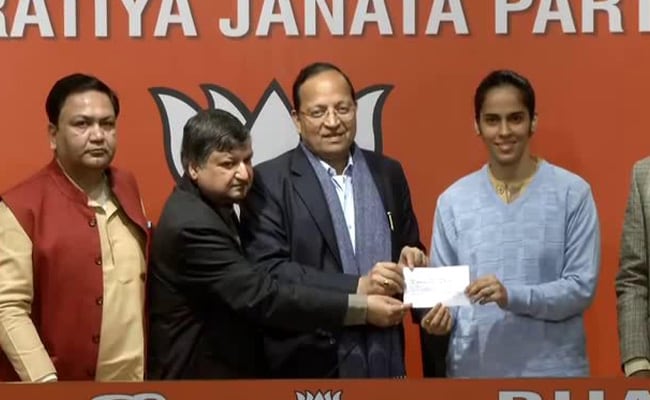 With her tweets praising Prime Minister Narendra Modi, Saina Nehwal was widely seen to lean towards the BJP.

One of her tweets became controversial when it was found to be identical to several others in praise of a PM Modi speech last year. Saina was trolled on Twitter with screenshots of the identical tweets. She was also among the sportswomen who put up identical tweets on Diwali thanking PM Modi for his initiative to empower women, with the hashtag #bharatkilaxmi.

The BJP roped in many famous personalities last year, including cricketer Gautam Gambhir, who was elected MP from Delhi in the national election, and wrestler Babita Phogat. Just before the Haryana assembly polls, the party roped in wrestler Sushil Kumar, Babita Phogat and former Hockey team captain Sandeep Singh. Sandeep Singh won the election and was appointed minister.