Samsung Galaxy A50 is in the news once again, this time, thanks to the leak of a user manual that tips some interesting details, such as the presence of an in-display fingerprint sensor, a triple rear camera, as well as a list of specifications that include a massive 4,000mAh battery. The Samsung Galaxy A50 is expected to be part of the company’s revamped Galaxy A-Series of devices, which are said to bring more premium features this year.

As per the leaked user manual and specifications sheet on SlashLeaks, an in-display fingerprint sensor is clearly visible in the Samsung Galaxy A50 schematics, while other interesting titbits include the triple rear camera setup, and the presence of an 3.5mm earphone jack at the bottom of the phone. An Infinity-U Display is also visible, Samsung’s terminology for what is normally called the waterdrop-shaped display notch in the industry. To recall, Samsung had introduced its new display types at its developer conference in November last year.

The leaked schematics from the user manual also show the presence of a dedicated microSD card slot on the Samsung Galaxy A50, as well as the presence of a USB Type-C port. A single rear-firing speaker is also visible, though the earpiece may also double up as one. 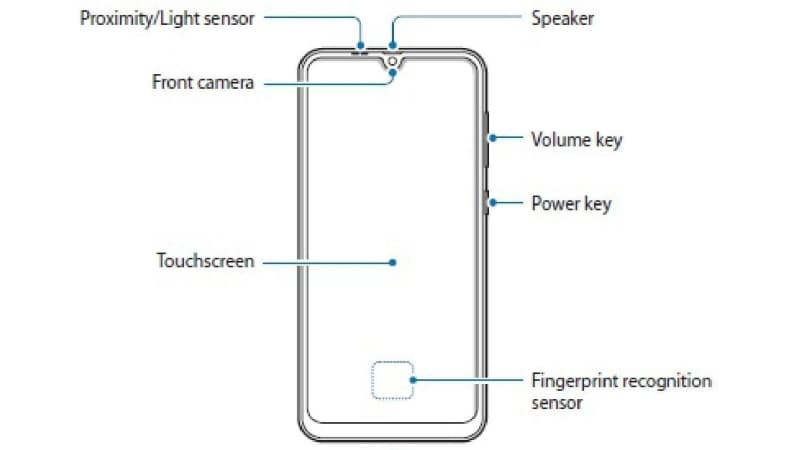 Coming to the leaked Samsung Galaxy A50 specifications, the dual-SIM smartphone with model number SM-A505F is seen to run Android 9.0 Pie, and sport a 6.4-inch Super AMOLED display with a full-HD+ (1080×2340 pixels) resolution. Unfortunately, no processor, RAM, or storage details were tipped, though earlier leaks had tipped an unnamed octa-core processor, 4GB of RAM, and 64GB of storage, on at least one of the variants.

The leaked specifications sheet doesn’t detail the triple rear camera setup entirely, but does mention a 25-megapixel 1/2.8-inch sensor with a 0.9-micron pixel size, an f/1.7 aperture, and OIS – this matches a previous leak as well. SlashLeaks however adds that the other two sensors will be an 8-megapixel (f/2.4) sensor and a 5-megapixel (f/2.2) sensor – all this is paired with an LED flash module. No information is available about the front camera.

Flipkart Mobiles Bonanza Sale Kicks Off With Deals on Realme 2...