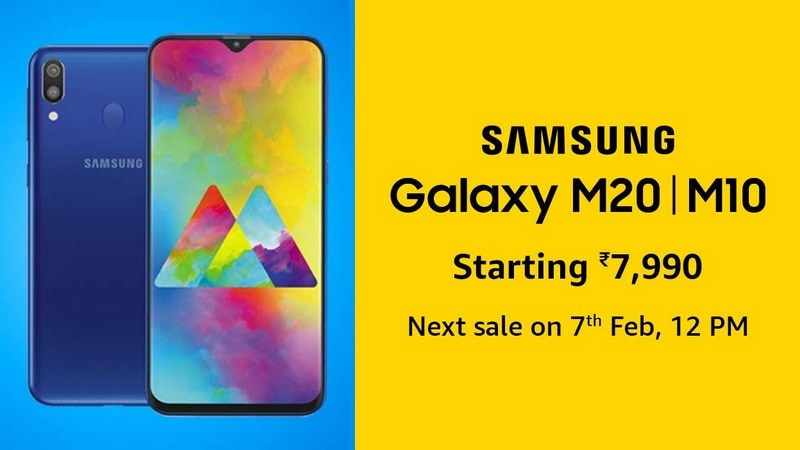 Samsung on Tuesday released its two industry-first Galaxy M smartphones – the Galaxy M10 and Galaxy M20  – for sale on Amazon India that claimed to have witnessed an “unprecedented” first day sale record. However, the company did not mention how many units were sold and for how long the online sale lasted before Amazon India put out the ‘sold out’ sign for the M-series smartphones. The Galaxy M-series phones will now go on sale again on February 7. The India-first smartphones come with features like Infinity V display and massive battery power and 3x faster charging technology.

“The inaugural sale of Galaxy ‘M10’ and ‘M20’ saw millions of people logging into Amazon.in and Samsung.com to own these devices. We are delighted by the unprecedented consumer response and thank people for their love and support,” the South Korean company said in a statement.

The Samsung Galaxy M20 runs on Android 8.1 Oreo and features a 6.3-inch full-HD+ (1080×2340 pixels) Infinity-V Display with a 19.5:9 aspect ratio. The smartphone is powered by the Exynos 7904 SoC paired with up to 4GB of RAM. In the imaging department, the Samsung M20 comes equipped with dual rear cameras comprising of a 13-megapixel primary sensor and a 5-megapixel ultra-wide sensor, while an 8-megapixel sensor takes care of selfies.

The smaller Samsung M10, on the other hand, comes equipped with a 6.2-inch HD+ (720×1520 pixels) Infinity-V Display that has a 19:9 aspect ratio and runs on Android 8.1 Oreo. The Galaxy M10 is powered by an Exynos 7870 SoC, coupled with 2GB or 3GB of RAM. It sports a dual camera setup on the back that consists of a 13-megapixel primary sensor and a 5-megapixel secondary sensor, while there is a 5-megapixel sensor on the front.

“The next sale of Galaxy M Series is planned for February 7 at 12 noon on Samsung.com and Amazon.in,” the company added.

These M-series smartphones are being manufactured at the world’s largest mobile phone factory — Samsung’s facility in Noida.