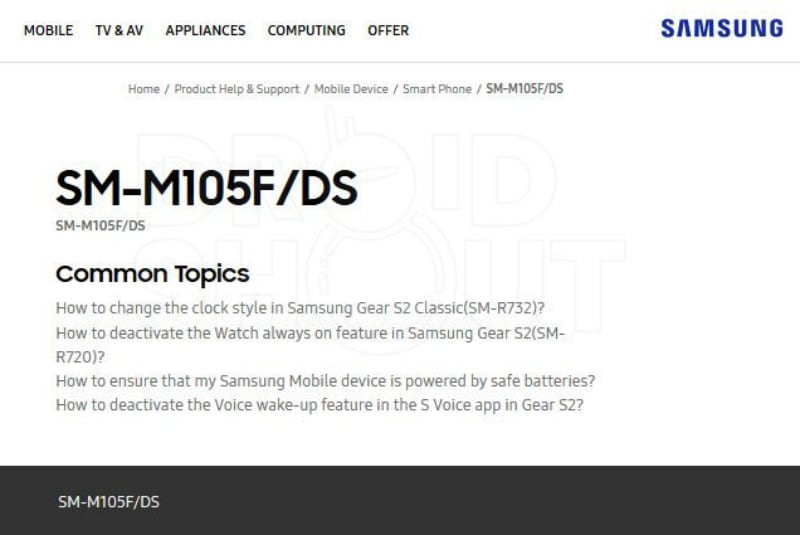 DroudShout claims to have spotted the support page for Samsung Galaxy M10 on the Samsung India website. The smartphone with model number SM-M105F/DS was listed briefly, before being removed once again. While the listing doesn’t reveal anything about the device, it does indicate that the launch is imminent.

The Samsung Galaxy M10 was recently spotted on the US FCC, and it is tipped to run on Android Oreo, sport a 6.02-inch screen, be powered by Exynos 7870 SoC, pack 3GB RAM, and offer 16GB as well as 32GB storage options. MicroSD slot expansion is expected to be up to 64GB, the smartphone is listed to pack a 3,400mAh battery, offer Bluetooth v4.2 connectivity, and measure in at 155.7×75.8mm. Rumours also suggest a 13-megapixel rear sensor, 5-megapixel front sensor, fingerprint scanner at the back, and an Infinity-V display.

In the meanwhile, the rumoured Samsung Galaxy M20 variant, expected to launch alongside the Galaxy M10, has also now been allegedly spotted on the US FCC (via NashvilleChatterClass), and it tips specifications like 156.4×74.5×8.8mm dimensions, which means it is slightly taller and narrower than the Galaxy M10. It also roughly translates to a 6.13-inch display size. The listing also suggests an EB-BG580ABN Li-ion polymer battery, and rumours suggest that it will pack a 5,000mAh battery. The smartphone also received Bluetooth SIG certification, and it is listed to come in four variants – SM-M205F, SM-M205F_DS, SM-M205FN_DS, and SM-M205G_DS. All of them will arrive with Bluetooth v5.0 connectivity.

Coming to the Galaxy M30 smartphone, AllAboutSamsung has reportedly leaked specifications and it is tipped to sport a taller 6.38-inch (1080×2220 pixels) Infinity-U display, triple camera setup at the back with 13-megapixel and two 5-megapixel sensors. Up front, the Galaxy M30 sports a 16-megapixel selfie camera. It is listed to pack a 5,000mAh battery, and dimensions are reportedly at 159×75.1×8.4mm. Previous reports suggest Exynos 7885 SoC, 4GB RAM, Android 8.1 Oreo, as well as 64GB and 128GB storage options.

All the three phones are expected to launch this month itself in India. Samsung still has to confirm launch event details though.