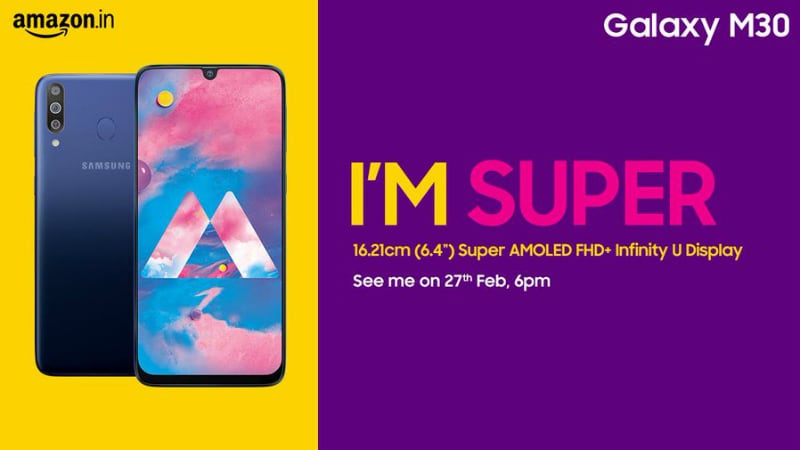 Samsung Mobile India’s official Twitter account on Monday revealed that it is set to launch the Galaxy M30 in India on February 27. The launch is set for 6pm IST on February 27 — notably, just a day before the India launch of the Redmi Note 7.

Alongside revealing the release date, Samsung in the same tweet specifies that the Galaxy M30 will come with a 6.4-inch full-HD+ Super AMOLED panel featuring the Infinity-U Display design. This comes as an upgrade over the LCD panels available on the Galaxy M10 and Galaxy M20 models that both were launched last month. Samsung also provided an Infinity-V Display design on the previous Galaxy M-series models.

An official render posted along with the latest tweet confirms the presence of a triple rear camera setup on the Galaxy M30. It also highlights the fingerprint sensor at the back of the device. Furthermore, the upcoming model is expected to go on sale through Amazon.in and Samsung India e-Store.

Specifications of the Galaxy M30 aren’t confirmed yet. However, a previous report claimed that there will be a full-HD+ (1080×2220 pixels) display and an Exynos 7904 SoC, along with 4GB of RAM. The rear camera setup is said to have a 13-megapixel primary sensor along with an f/1.9 lens, a 5-megapixel secondary sensor comprising an f/2.2 lens, and a 5-megapixel tertiary sensor with the same f/2.2 lens. The Galaxy M30 is rumoured to have a 16-megapixel camera sensor at the front along with f/2.0 lens and come with a massive, 5,000mAh battery.

A report by IANS last week said that the Samsung Galaxy M30 would carry a price tag starting at Rs. 15,000. The sales of the new model are likely to begin in the first week of March.

That being said, Samsung is apparently set to give a tough competition to Xiaomi that is set to launch its Redmi Note 7 in India on February 28. The USP of the Redmi Note 7 is its 48-megapixel rear camera.