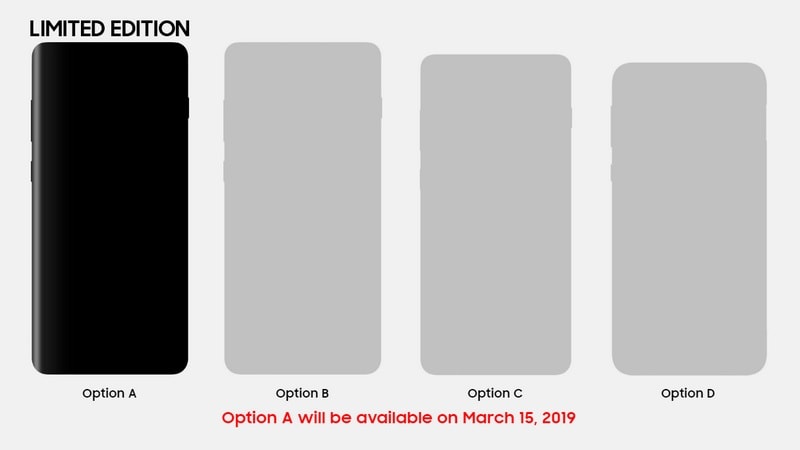 While the smartphone industry is abuzz with the impending launch of three Samsung Galaxy S10 variants at an event later this month, there has also been some chatter about a special edition variant of the upcoming Galaxy S10. Thanks to a pre-order listing on the Samsung Philippines website, it appears that the Samsung Galaxy S10’s special edition will be available in the Asian nation starting March 15, presumably after it is unveiled at the Galaxy Unpacked event later this month. However, the pre-order page is only accepting early bookings at the moment and does not reveal anything about its specifications or features.

The pre-order page on the Samsung Philippines website, which was spotted by XDA-Developers, shows the silhouette of the rumoured Galaxy S10’s special edition with a curved display and a larger profile than three other smartphones listed alongside. The listing, accessible after logging in, simply mentions the upcoming smartphone as “Limited Edition”, with the “Option A” code below it and a text that says it will be available on March 15, 2019. The silhouette of three other smartphones with the code name “Option A”, “Option B”, and “Option C” is also present, which are apparently the Samsung Galaxy S10+, Galaxy S10, and the Galaxy S10 E (aka Galaxy S10 Lite) respectively.

Another report suggests that the Samsung Galaxy S10 Limited Edition will sport a large 6.7-inch display and will pack a total of six cameras, four imaging sensors on the rear and a dual camera setup on the front. Moreover, the upcoming smartphone is also tipped to come equipped with a massive 5,000mAh battery. Other rumoured specifications include the Exynos 9820 SoC, however, Samsung might also launch a Snapdragon 855-powered variant of the Galaxy S10 Limited Edition in certain markets.

Samsung might also launch a 5G ready variant of the Galaxy S10 Limited Edition, which will reportedly be available exclusively via Verizon in the US, at least in the initial stage of its release. The 5G version is also said to be headed to the company’s home market South Korea. Back in January, Samsung revealed that the company aims to launch a 5G smartphone in the first half of 2019 and also reportedly showcased its prototype at CES 2019.