We are just over a week away from Samsung’s Galaxy Unpacked 2019 event, where the company is going to announce the new Galaxy S10 family for smartphones, and the last-minute leaks about the phones have revealed some new bits of information and seemingly confirmed a few old ones. Over the past 24 hours, an alleged banner showing Samsung Galaxy S10+, renders claim to be showing Galaxy S10 in Cinnabar Red and Blue, and a purported retailer listing for Ceramic Black Galaxy S10 have popped up online.

Starting with the alleged banner for the Samsung Galaxy S10+, which was shared by known tipster Evan Blass (aka @evleaks) on Twitter, the banner seems to confirm the design of the Galaxy S10+ that we have seen in multiple leaked renders until now. Also, one can spot the 3.5mm audio jack in the photo, meaning Samsung isn’t ready just yet to ditch the audio jack like other major Android manufacturers. You can also see the punch-hole design with space for a front dual-camera setup.

Moving to the renders showing Red and Blue colour variants of the Galaxy S10 smartphone, it seems Samsung may be planning to bring Cinnabar Red and Blue (exact colour name unclear) variant of the Galaxy S10. While the purported Red colour render was shared by a website called MobileCryptoTech.com, the Blue version render has been published by MySmartPrice. Although there has been some chatter about the Blue coloured Galaxy S10, it is the first time we are hearing about a Red version of the Samsung flagship. 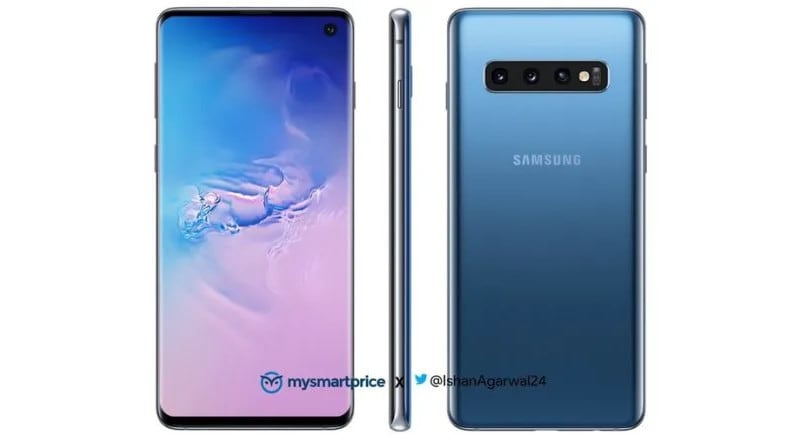 Most of the leaks and rumours have only suggested the presence of three colours for Galaxy S10 – Green, Black, and White, so it is quite likely we will only see three colour variants at launch, with more releasing on a later date. MySmartPrice has also revealed a possible Blue colour variant of the Galaxy S10e (aka Galaxy S10 lite) smartphone. The Galaxy S10e is supposedly going to be offered in a multitude of colours, including Canary Yellow, Prism Black, Green, and White. The Blue Galaxy S10e version is likely to be unveiled later than the other variants of the phone. 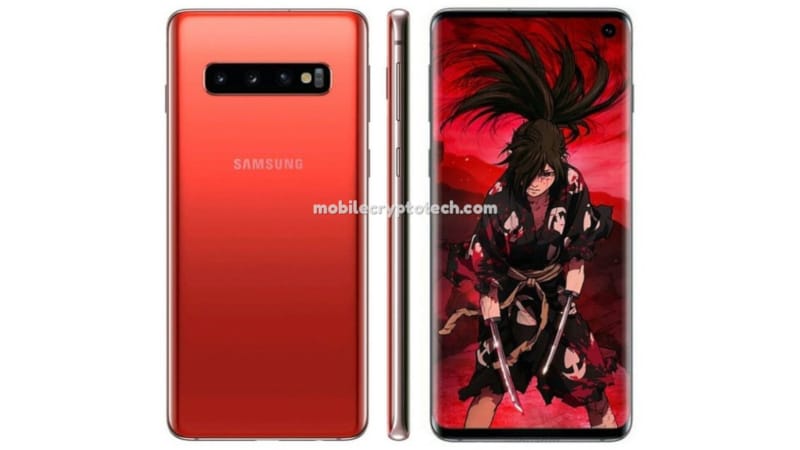 Lastly, it seems a Vietnamese retailer has jumped the gun and published a listing for the Galaxy S10 Ceramic variant. The retailer FTP Shop’s listing shows 8GB RAM + 512GB internal storage version of the Galaxy S10 with a price tag of VND 30,990,000 (roughly Rs. 94,400). There is no way to verify the authenticity of the listing and it could very well turn out to be a placeholder or fake, so take this with a pinch of salt. The listing was first spotted by SamMobile.

To remind you, Samsung is hosting a press event on February 20 in San Francisco, where it will be introducing the Galaxy S10 lineup – Samsung Galaxy S10, Galaxy S10+, and Galaxy S10e. The company will also talk about its foldable phone as well as the 5G variant of the Galaxy S10 at the event.