Samsung Galaxy S10 family is debuting later this month. But just days ahead of its formal debut, rumours and leaks of the upcoming models are reaching new heights. A report claims that the regular Samsung Galaxy S10 model will come with a 10-megapixel selfie camera along with Optical Image Stabilisation (OIS). The smartphone is also touted to have an in-display fingerprint sensor faster than the “conventional” options. Live images of the Galaxy S10 alongside the Galaxy S10e and Galaxy S10+ have also emerged on the Web. Similarly, some clear renders showing different colour variants of the Galaxy S10 range has been leaked online. Some images purportedly of the Samsung Galaxy S10e have also surfaced — confirming the name of the upcoming Samsung phone as well as shows the Infinity-O Display panel.

Among other developments, GSMArena has reported, citing a person familiar with the development, that the Samsung Galaxy S10 family will come with a new Super AMOLED display technology that will support 10-bit colour processing. The regular Galaxy S10 model is reported to include a new 10-megapixel selfie camera along with OIS, Dual Pixel autofocus technology, and 4K video recording support. The Galaxy S10+, on the other hand, is said to have a secondary depth-sensing unit at the front — alongside the primary selfie camera.

The report by GSMArena also corroborates the previous rumour and mentioned that the Samsung Galaxy S10+ will come with a 4,100mAh battery and support reverse wireless charging. The top-of-the-line model could also be capable of capturing super fast motion shots at a speed of 0.8 seconds over 0.2-0.4 seconds. Moreover, the Galaxy S10e, in the range, is said to have an exclusive Vivid Yellow colour option, though all models are rumoured to have a metal finish and a “hint of crystal shimmer”.

Separately, Twitter account SaudiAndroid has posted purported hands-on images of the Samsung Galaxy S10 and Galaxy S10+ to suggest triple rear camera setups and in-display fingerprint sensors on both new models. The tweet has now been pulled, but not before SamMobile managed to get its hands on the photos. WinFuture has also published a gallery of the Galaxy S10 renders that shows the models in Black, White, and Green colour options. The White model appears to have a hyper-reflective finish, while another render suggests Ceramic Black and Prism Black colour options of the Galaxy S10+. The ceramic material could be more resilient to scratches and accidental drops. 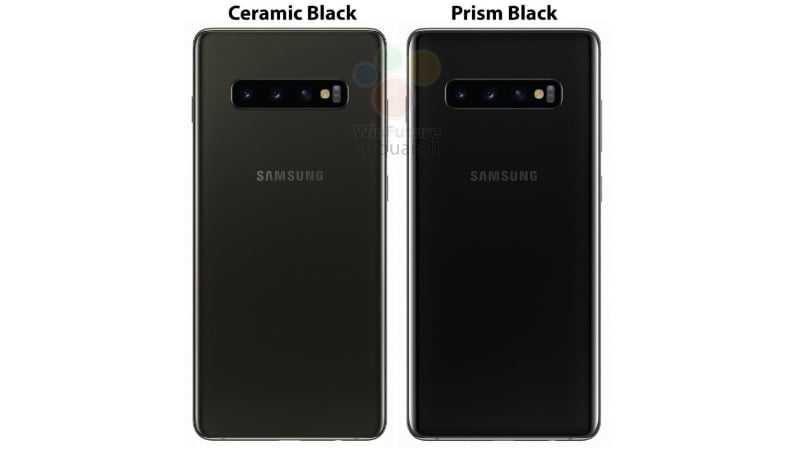 A distinct render also shows a pair of wireless headphones that Samsung could unveil alongside the Galaxy S10 family later this month. The render shows the headphones apparently sitting on the rear side of the Galaxy S10+. This suggests how reverse wireless charging would be able to charge other compatible devices. Some initial rumours suggested that the headphones could debut as the Samsung Galaxy Buds and carry a price tag of EUR 149 (roughly Rs. 12,100). 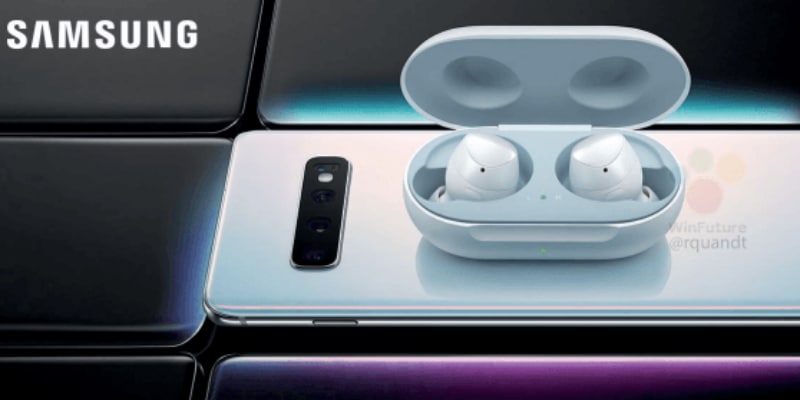 Additionally, live images of the Samsung Galaxy S10e have been leaked on SlashLeaks. The images show that 5.8-inch Infinity-O Display panel of the upcoming model alongside its selfie-hole design, which is around 0.5mm – similar to what’s featured on the Galaxy A8s. One of the images also shows the boot screen of the smartphone that explicitly mentions the Galaxy S10e moniker. 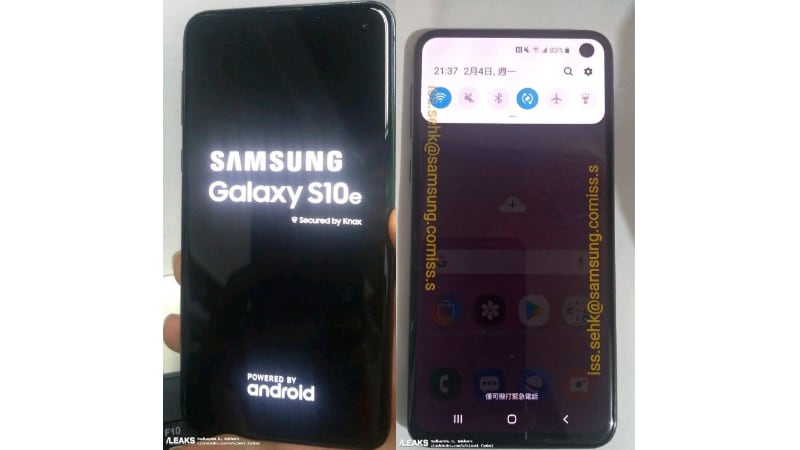 Another render on SlashLeaks details the side-mounted fingerprint sensor of the Galaxy S10e. The smartphone is expected to come in Prism Black, Prism Green, Pearl White, and Canary Yellow.

To recall, Samsung is hosting its Galaxy Unpacked 2019 in San Francisco on February 20. It is safe to expect new rumours hitting the Web in the meantime.