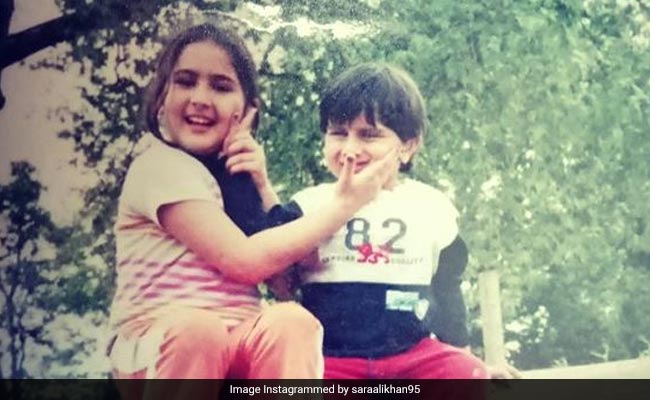 Sara Ali Khan‘s World Sibling Day post for brother Ibrahim is so adorable! The Simmba actress picked out three of her favourite photos from the family album for her Instagram post and one of them is a cute blast from the past. “Happy World Siblings Day to my not so little brother,” she wrote in the caption and added: “Best brother” and “Always and forever in the caption.” In the throwback photo, Sara and Ibrahim pose in their pyjamas while the other two pictures reveal that nothing really has changed much over the years. Meanwhile, many on Sara’s Instafam can be seen asking something repeatedly – “Where is Taimur?”

Sara Ali Khan and Ibrahim are Saif Ali Khan’s children with his first wife Amrita Singh. Saif married Kareena Kapoor in 2012 and Taimur was born in 2016.

“What about Taimur?” read a comment while another user added: “Where is Taimur?”

Take a look at Sara’s post for Ibrahim here:

Taimur may not be there in this particular post of Sara but adorable Taimur-Sara moments are there in plenty on the actress’ Instagram. Don’t you remember the adorable bhai dooj pictures and the ones from Christmas?

Taimur is the life and soul of the Pataudi siblings. On an episode of Koffee With Karan, Sara had revealed that Taimur absolutely steals the show when he’s around and the he addresses Sara as “gol”: “You know he says gol. So he says amma to Kareena, he says abba to my father, he says bhai to my brother and then he says gol.” LOL.