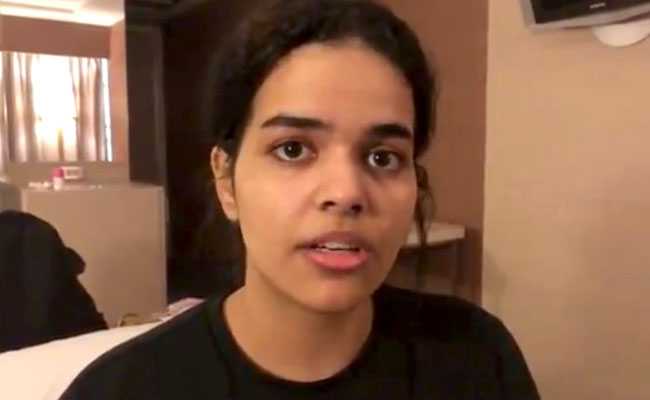 A Saudi woman who fled her family, claiming fear for her life, and used social media to amplify her calls for safe haven was granted asylum by Canada on Friday, an official in Thailand said.

The decision to give haven to the 18-year-old Rahaf Mohammed Alqunun capped a nearly week-long drama that highlighted the power of social media to call attention to her case and reverse initial plans by Thai officials to deport her to Kuwait, where she fled her family while on holiday.

Alqunun’s appeal for refugee status also underscored the severe restrictions that women in Saudi Arabia face. Under the kingdom’s strict guardianship laws, adult women must obtain permission from a male guardian to travel abroad, marry or be released from prison. In some cases, a male’s consent is also necessary to work.

Alqunun, who was stopped by Thai authorities, had barricaded herself in her airport hotel room and demanded to meet with representatives of the Office of the U.N. High Commissioner for Refugees.

Using Twitter, Alqunun documented the standoff in real time, garnering tens of thousands of followers. A loose group of activists and friends bolstered her social media campaign using the hashtag #SaveRahaf and was able to stave off deportation.

She was admitted to Thailand on Monday while the U.N. refugee agency processed her request. Several countries, including Australia, had said they could welcome Alqunun as a refugee. But she expressed a preference for Canada.

“The story ends today,” said the head of Thailand’s immigration bureau, Surachate Hakparn. “Ms. Rahaf is going to Canada as she wishes”

He said Alqunun left Thailand on a flight en route to Toronto. She was in good health and spirits, he said, and had a “smiling face.”

The U.N. refugee agency coordinated with Canadian authorities to resettle her there, and she will be in the care of the International Organization for Migration once she arrives, he added.

Alqunun, from Hail in northwestern Saudi Arabia, said she feared she may have been killed if forced to return to her family. Her friends said she had suffered abuse at family members’ hands.

Alqunun’s father and brother, who denied any allegations of abuse, traveled to Thailand and attempted to meet her, but Surachate said she had refused the meeting. The two men planned to return to Saudi Arabia early Saturday, he said.

Alqunun deactivated her Twitter account Friday. Multiple supporters, including journalist Sophie McNeill, who has been in contact with Alqunun during her ordeal, said on Twitter that she was fine but had received death threats.

Phil Robertson, deputy director of Human Rights Watch’s Asia division, tweeted: “Rahaf temporarily suspended her #Twitter account because she has been receiving some very nasty, very real death threats. Not sure when she will resume.” He called on Twitter to shut down those accounts.

Thailand, which is not a signatory to the 1951 Refugee Convention, has a mixed history of handling asylum seekers. The country has signed on to international human rights treaties that bar it from deporting people to places where they are at serious risk of harm.

It has served as a popular escape route for defecting North Koreans, who are generally sent to South Korea. However, in 2015, authorities deported about 100 Uighur Muslims back to China, sparking a backlash from human rights groups and the United States.

More recently, Hakeem al-Araibi, 25, a former soccer player from Bahrain who had been granted refugee status in Australia after speaking out against a Bahraini official, was detained in late November in Thailand. He was traveling to the Southeast Asian country for his honeymoon when he was stopped.

Australian Foreign Minister Marise Payne said Thursday she raised her concerns over his continued detention with Thai authorities during a visit to Bangkok this week.

“The Thai government is most certainly aware of the importance of this matter to Australia,” Payne told reporters.