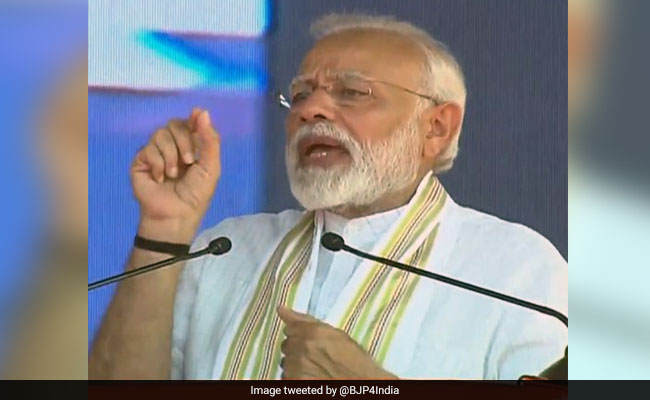 Prime Minister Narendra Modi on Sunday said that the Congress governments in the past ignored the defence sector, alleging that for them it was a “sector of deals” meant for “supporting their own friends”. He alleged the party was involved in several scams related to the sector, adding it was his government that fulfilled the demand of “one rank, one pension (OROP)”.

“From the seas to the skies, the Congress has several scams associated with the defence sector, and in the process, the party did not allow the modernisation of defence forces for years they were in power,” PM Modi said at a rally in Tamil Nadu’s Tiruppur.

“Those who got the opportunity to rule the nation for years did not bother about our defence sector. For them it was just a sector of deals and supporting their own friends,” he added.

His government’s approach towards the defence sector is different, he claimed.

“We dream of an India that is self-sufficient in defence production and where our forces have all the possible support they require in keeping our nation safe,” he said.

“It was our government that had the honour of fulfilling the demand of one rank one pension, which was pending for decades,” he added.

The promise of welfare of personnel of the armed forces has been a regular feature in BJP manifestos. In 2014, the BJP had promised to implement OROP. They fulfilled the promise, but not to the satisfaction of a section of Army personnel, who said the government’s version of the scheme was different than theirs.

OROP has also been used by the BJP to target its biggest rival, the Congress. BJP president Amit Shah last month said the Congress gave the country “only Rahul, only Priyanka”.

“When the BJP government was formed, within a year Modi ji delivered on his promise of one rank one pension. Modi ji gave OROP to our jawans, Congress gave ‘only Rahul, only Priyanka’,” the BJP president had said, after Priyanka Gandhi joined politics.

PM Modi’s attack came days after a report published by The Hindu said that the Defence Ministry had expressed its strong reservations to “parallel negotiations” conducted by the Prime Minister’s Office with France on the multi-billion dollar Rafale figher jet deal.

The report created an uproar in political circles, with Congress president Rahul Gandhi launching a savage attack on PM Modi. “Who do you think he’s doing parallel negotiations for? Not for you and me? It is for Anil Ambani… this proves that Chowkidaar is a thief,” he said.

The BJP reacted to Mr Gandhi’s attack, saying he was peddling lies.