And while a new piece of research argues that our fascination with erupting volcanoes is putting lives at risk, others say “volcano tourism” need not be dangerous if travelers stick to some basic rules.
The risks of volcano tourism are the focus of a paper published by the UK’s Royal Geographical Society.
Author Amy Donovan, a geographer at the University of Cambridge, examined the rising interest in volcanoes in recent decades and tried to explain our attraction to eruptions.
“People are drawn by the power of volcanoes, I think — it is more than a spectacle, but rather an experience,” Donovan told CNN via email.
“Volcanoes are one of the forces of nature that truly are beyond human power to control: We can’t do anything about eruptions, other than get out of the way.” 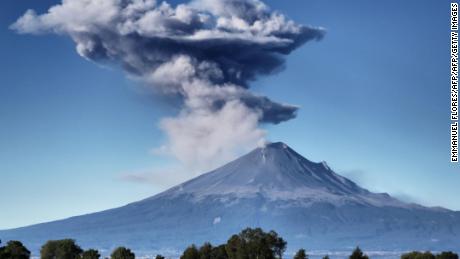 Donovan’s research focuses on Iceland, which has seen a dramatic increase in the number of foreign visitors — from 488,622 in 2010 to 2,224,074 in 2017, according to the paper — with many people citing the country’s dramatic landscapes and active volcanoes as a reason for booking their trip.
Ewan Callan, manager of tourist information service What’s On in Iceland’s capital, Reykjavik, told CNN that demand for volcano tours has increased as travel becomes more accessible.
Demand spikes when there is a volcanic eruption, said Callan, which tends to be around every 4-5 years in Iceland.
While tourism has become a vital part of the Icelandic economy, the appetite for dramatic experiences with nature can cause problems, argues Donovan.
Icelandic emergency services tasked with keeping people safe in the event of a volcanic eruption have become increasingly concerned about tourists disobeying the rules in their search for a unique experience, according to Donovan’s paper.
Dofri Hermannsson, owner of tour company Reykjavik Erupts, told CNN via email that in the past a small number of people have taken unnecessary risks around Icelandic volcanoes.
“We have seen a few examples of reckless attempts to get dangerously close to erupting volcanoes in the past but at (the) last eruption, in Holuhraun (in 2014-15), authorities stepped in and closed all access to the area,” said Hermannsson.

Nonetheless, Donovan says in her paper, some people paid local helicopter pilots to take them in secret after dark.
And Iceland’s unique geology means it’s important to travel with an expert guide.
“In Iceland, the volcanoes under glaciers create a special risk of immediate floods,” said Hermannsson. “For a tour operator, it is important to be aware of that danger, to know the emergency plans and how to act in the case of an emergency event.”
This tension between safety concerns and the appetite for thrills has resulted in deaths in Iceland and elsewhere.
In 2010, two tourists froze to death attempting to reach a volcanic eruption at Iceland’s Fimmvörðuháls pass that caused a spike in visitor numbers — an example of the lengths people go to in order to get close to a volcano.
And in 2017, an 11-year-old boy died after falling into the Solfatara Crater in Pozzuoli, Italy, and his parents also died when they tried to save him.
Most tourists are unprepared for these risky situations, says the paper, which increases pressure on emergency services.
“Emergency services face the difficulty of dealing with people in restricted areas,” Donovan told CNN. “If you go into a restricted area, then emergency services have to either leave you or come into a hazardous area themselves.”
Donovan writes that the issue has become such a concern that the Icelandic authorities have to think carefully about whether or not to alert the public about an eruption.
On the one hand, people in the local area may be in danger from an eruption. On the other, an alert could lead to a rush of people into the danger zone to experience it.
And while authorities grapple with the best approach to keeping people safe, Donovan has some advice for volcano tourists.

“Pay attention to what the authorities are saying — active volcanoes pose a number of hidden hazards, such as high levels of toxic gases and unstable ground,” she said.
Even if they look safe, they can actually be dangerous and there is usually a good reason for restrictions on entry to hazardous areas.”
But while eruptions are hard to police, points out Callan, of What’s On, there are resources designed to keep people safe.
One example is SafeTravel.is, an online portal run by the Icelandic Association for Search and Rescue, which offers safety advice.
Alan Clewlow, a geologist who has been running specialist tour operator Volcanic Experiences for more than 20 years, says volcanoes are carefully monitored and the only people at risk of injury are those who deliberately take risks.
“Providing you abide by the regulations there shouldn’t be any danger,” Clewlow, who offers trips to volcanoes around the world, told CNN via telephone.