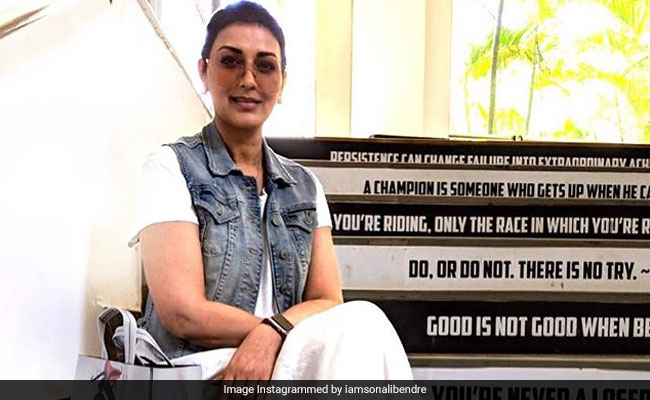 Sonali Bendre, who returned to Mumbai in December after undergoing treatment for cancer in New York, is back on sets after a “major sabbatical” and the actress describes the feeling is “surreal”. Sonali shared a photo and a video of herself from the first day at shoot and wrote that she is “grateful to be back in action” and feels “an additional sense of responsibility”. “Being back on a set after a major sabbatical – one that has been testing in many ways on so many levels – is a surreal feeling. After all this, I sort of feel an additional sense of purpose and meaning and I’m so grateful to be back in action,” read an excerpt from the post shared by the actress.

For Sonali, the feeling of being back at work is absolutely “beautiful” and her recent post describes this emotion perfectly: “I don’t think words would do justice to how beautiful it feels to be back at work…to face the camera again and portray the range of emotions required. Given that my emotions have been running high for the last couple of months, it feels good to give into the emotions that the job requires. It’s just the kind of day that helps me,” Sonali wrote.

Several Bollywood celebrities commented on the post and wished her best for her endeavors. “Now that’s a moment,” wrote Hrithik Roshan. “Loving that you are back in action. That means you can come for fish fry,” Farah Khan wrote. Dia Mirza, Abhishek Bachchan, Daler Mehndi, Kunal Kapoor and several others commented on the post.

In July last year, Sonali Bendre revealed she was diagnosed with metastatic cancer. After months of treatment and undergoing chemotherapy sessions, Sonali actress touched down in Mumbai in December last year, when her husband Goldie Behl confirmed that she’s still recuperating. “Sonali is doing good. She is back for good. She is recovering very well. For now, treatment has ended. But the disease can come back so regular check-ups will be done,” ANI quoted Goldie Behl as saying. Sonali Bendre has not announced any project as of now.