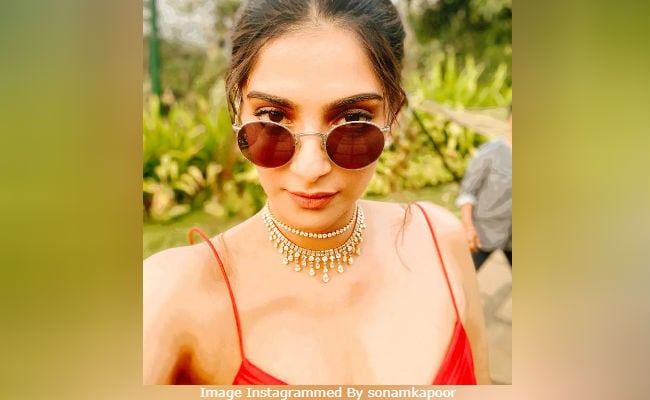 Sonam Kapoor has reportedly checked in to Goa to attend a wedding function and on Wednesday evening, she treated her fans to a wonderful picture from the city. In the selfie posted by Sonam, she can be seen wearing an orange outfit with plunging neckline. She has complemented her look with a stunning neckpiece. “Ready to celebrate Goa style,” Sonam, 33, captioned her post. “Hottiee” is how her husband Anand Ahuja reacted to the photo. He also added a heart-eyed emoji to the post. It appears that Sonam’s sister Rhea has also accompanied the actress to Goa. She shared a photo of herself looking chic in a purple outfit from the studios of Dhruv Kapoor and paired her OOTD with sneakers from VegNonVeg (owned by Anand Ahuja).

In Mumbai, Sonam, Anand and Rhea attended the wedding with their family. Pictures of the Kapoors were all over the Internet.

Sonam also posted a frame-worthy picture with Anand and wrote, “We clean up nicely.” She wore a golden lehenga to the function and matched her look with her mother Sunita Kapoor’s jewellery.

Sonam Kapoor and Anand Ahuja married on May 8, 2018 in Mumbai. Their pre-wedding festivities included a mehendi function and a blockbuster sangeet ceremony. After the wedding, the Kapoors hosted a star-studded reception for Bollywood.

On the work front, Sonam Kapoor’s next film is Ek Ladki Ko Dekha Toh Aisa Laga, in which she co-stars with her father Anil Kapoor. She is also shooting for The Zoya Factor with Dulquer Salmaan.