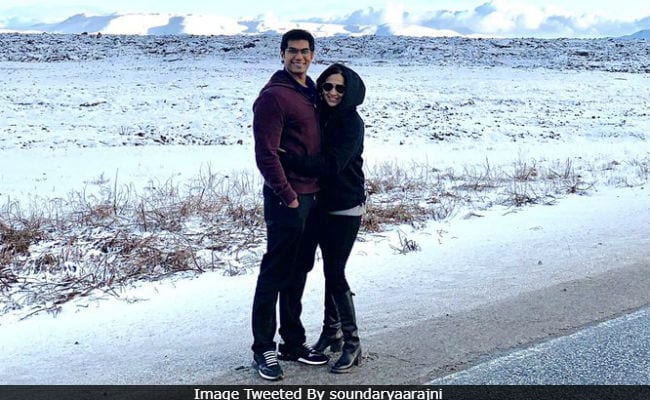 Soundarya Rajinikanth and Vishagan Vanangamudi, who married earlier this week in Chennai, are currently in Iceland for their honeymoon. Soundarya shared two pictures from the honeymoon-special album on Twitter and added hashtags like ‘loving it’ and ‘living life’ to her post. She also mentioned that she’s missing her son Ved (with first husband R Ashwin). In one of the photos shared by Soundarya, the couple pose amidst snowy mountains in the background. Soundarya is superstar Rajinikanth and Latha Rajinikanth’s daughter. She married actor-businessman Vishagan Vanangamudi in a lavish wedding in Chennai on February 11. Take a look at the pictures of the newlyweds from Iceland.

Soundarya and Vishagan Vanangamudi married as per south Indian rituals. She opted for Abu Jani Sandeep Khosla couture for the wedding. Tamil Nadu chief minister Edappadi K Palaniswami, actor-politician Kamal Haasan were among the several guests who attended the wedding.

Here are some of the pictures from Soundarya Rajinikanth and Vishagan Vanangamudi’s wedding.

For the post-wedding reception, Soundarya wore an embellished red outfit, which she accessorised with a gold choker. Actress Kajol, whom Soundarya directed in VIP 2, along with brother-in-law Dhanush, shared a picture from the function.

Before the wedding festivities began, Rajinikanth hosted a pre-wedding reception for families and close friends. It was followed by a combined sangeet and mehendi ceremonies. Soundarya had shared glimpses from the party and wrote: “Blessed and grateful beyond words. The three most important men in my life… my darling father… my angel son… and now you my Vishagan.”

Blessed & grateful beyond words !!!! The three most important men in my life … my darling father … my angel son … and now you my Vishagan pic.twitter.com/v7Ra32oiYe

Soundarya is a graphic designer and filmmaker. Vishagan owns a pharmaceutical company and he was recently seen in the film Vanjagar Ulagam.