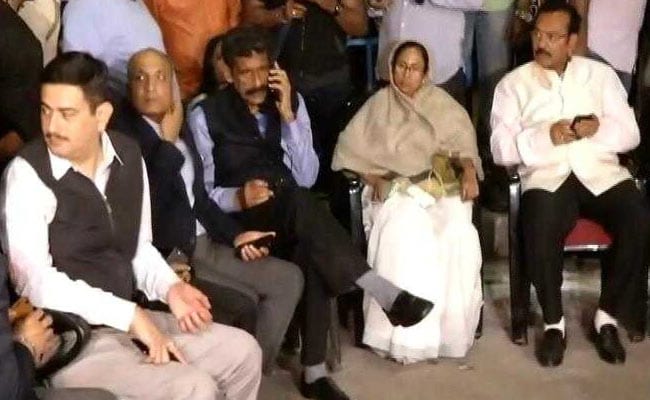 West Bengal Chief Minister Mamata Banerjee sat on a dharna to “save the constitution” after a huge showdown between the police and officials of the Central Bureau of Investigation. The CBI officers wanted to question Kolkata police chief Rajeev Kumar in two Ponzi schemes, but the CBI officials who turned up at Mr Kumar’s home were taken to a local police station and allegedly detained. “There is total constitutional breakdown. It is my job to protect my officers,” the Chief Minister told reporters in the evening. “They (the BJP) cannot fight is politically. That’s why they are resorting to all this… Mr (Ajit) Doval is doing whatever PM wants him to do, he is the one giving all the instructions to CBI,” she said.

Trinamool leader Derek O’Brien alleged that the BJP was planning a “constitutional coup.” Opposition leaders have also spoken out in support of Ms Banerjee, with RJD chief Tejashwi Yadav saying the state government had to take the move due to “political decisions” the CBI had been taking at the BJP’s behest. Former BJP leader Yashwant Sinha also slammed the centre for the showdown in Kolkata.  Congress leader Abhishek Manu Singhvi also criticized the CBI’s ation.

The CBI officers, who were released later, are planning to meet the Governor. Ms Banerjee is sitting on dharna at the designated spot for protests in Central Kolkata, accompanied by Kolkata police chief Rajeev Kumar.

Here are the live updates on the Kolkata Police-CBI clash and Mamata Banerjee’s dharna:

I spoke with Mamata Di tonight and told her we stand shoulder to shoulder with her.

The happenings in Bengal are a part of the unrelenting attack on India’s institutions by Mr Modi & the BJP.

The entire opposition will stand together & defeat these fascist forces.

23:23 (IST)
Pankaj Srivastava said that Rajeev Kumar was not cooperating with the CBI in the case
23:23 (IST)
“We did not need any court order to go to police commissioner’s residence,” CBI Joint Director Pankaj Srivastava told NDTV. “We are investigating under the directions of the Supreme Court,” he added.
23:08 (IST)

In solidarity with @MamataOfficial
History stands testament to how JK has faced the wrath of central agencies. Its disheartening to see how institutions are being hijacked only to discredit political opponents . Doesn’t bode well for the Centre – State relationship .

23:05 (IST)
23:04 (IST)
Congress chief Rahul Gandhi has spoken to Mamata Banerjee and expressed solidarity, news agency ANI reports
22:50 (IST)
Sources have said that the CBI may move the Supreme Court over the matter. Read more here
22:19 (IST)
“The independence of every institution has been compromised under this fascist BJP Government,” DMK chief MK Stalin tweeted, adding that he is going to stand with Mamata Banerjee in “her fight to protect the federal structure of this country and to save democracy.”
22:16 (IST)
Tejashwi Yadav has said that he might visit Kolkata tomorrow
22:15 (IST)
Delhi Chief Minister Arvind Kejriwal has also extended his support to Ms Banerjee
22:15 (IST)
Congress leader Ahmed Patel and National Congress leader Omar Abdullah have called up Mamata Banerjee over the row
22:12 (IST)
22:12 (IST)
BJP leader Babul Supriyo tweeted that President’s rule should be imposed on West Bengal to control the “rogue” government. He said that this is a constitutional crisis created by Mamata Banerjee to “shield her corrupt and tainted accomplices”
22:09 (IST)

We strongly condemn the incidents happening in Kolkata, a glaring example of how Modi-Shah duo are destroying the institutions. Attacking political opponents in different States, few days before the Parliament elections commence, will have disastrous consequences in the country.

22:09 (IST)
“For the past few months, the CBI, under pressure of the BJP office, had been taking political decisions, forcing state governments to take such decisions. If the CBI continues to work as an alliance partner of the BJP, it won’t be surprising if the people take matters into their own hand. Nobody is above the people in democracy,” Tejashwi Yadav tweeted.
Samajwadi Party chief Akhilesh Yadav also tweeted in support of the West Bengal chief minister. “Because of BJP government’s exploitative policies and CBI’s brazen political misuse, the constitution and the people’s independence is in peril. Hence, we completely support Mamata Banerjee’s dharna. People and the opposition of the country are united to defeat the BJP in elections,” he wrote.
22:08 (IST)
Several opposition leaders have spoken out in support of Mamata Banerjee, with a few of them reportedly set to visit Kolkata on Monday over the matter.
22:07 (IST)

The highest levels of the BJP leadership are doing the worst kind of political vendetta. Not only are political parties their targets, they are misusing power
to take control of the police and destroy all institutions. We condemn this 1/2

22:07 (IST)
Mamata Banerjee had earlier tweeted saying Mr Kumar was the best police officer in the country and that the BJP was engineering the controversy
22:06 (IST)
Rajeev Kumar was heading the special investigation team probing the Saradha and Rose Valley Ponzi scams that had surfaced in the state in 2013.

Rajeev Kumar was asked to help with the investigation when several key documents of the cases allegedly went missing. CBI sources said he had received several summons for questioning over the last two years.

22:03 (IST)
The CBI officers were taken first to the Park Street police station and then to the local Shakespeare Sarani police station
22:02 (IST)
The row erupted earlier today, when a team of forty CBI officers turned up at the Park Street home of police chief Rajeev Kumar. The guards stationed there refused them entry and senior police officers rushed to the spot and virtually shepherded the CBI team away from the residence