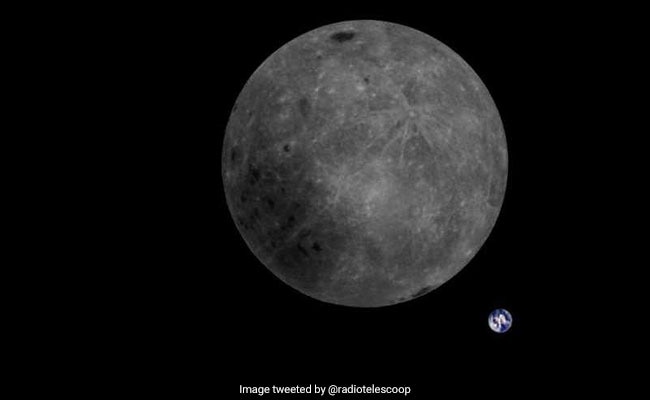 A Chinese lunar orbiter has taken a stunning image that shows the giant rear side of the moon with a tiny planet Earth nearby, the media reported.

The image was snapped by a camera aboard the Chinese DSLWP-B/Longjiang-2 satellite on February 4.

It might just be the first image of the moon’s rear side together with Earth that we’ve seen since another Chinese spacecraft, Chang’e 5T1, took a shot of both bodies together in 2014, the CNET reported on Tuesday.

Longjiang-2 had to take a little break from photography for a few months to avoid interfering with the landing of Chang’e 4, but it now appears to be back at it.

The Dutch Dwingeloo Radio Telescope in the Netherlands downloaded it at the agonising speed of less than one kilobyte per minute.

Earlier in January, Chang’e-4 lunar probe became the first spacecraft to make a soft landing on the far side of the moon.

The probe, comprising a lander and a rover, touched down at the pre-selected landing area at 177.6 degrees east longitude and 45.5 degrees south latitude on the far side of the moon.