Over the years, the number ten shirt has become a coveted number for creative players.

While it may not be as sacred as the number nine shirt has been at Chelsea in recent years (here’s looking at you, Steve Sidwell, Khalid Boulahrouz), many fine players have worn the number ten shirt for the Blues.

With that in mind, let us take a trip down memory lane and have a look at some of Chelsea’s greatest to have worn the number ten. Though many snide football fans like to suggest Chelsea FC’s history began in 2003 following Roman Abramovich’s takeover, they are sadly mistaken.

Chelsea were involved in one of the most iconic FA Cup finals in history in 1970, when they defeated Leeds United in a replay at Old Trafford. The replay itself is one of the most notorious games ever played in English football. The match was recently revisited and ‘re-refereed’, and the conclusion was that six red cards and 20 yellow cards would have been handed out during the game by modern standards.

Ian Hutchinson was the man who wore the number 10 at both Wembley and the Old Trafford replay. He scored a late equaliser in the game at Wembley to make it 2-2 and send the final to a replay, which Chelsea won 2-1 after extra time – winning their first FA Cup in the process. A potentially controversial pick considering Willian has only worn the number 10 shirt – he previously wore 22 for six seasons – for the last seven months, but if the flamboyant Brazilian isn’t included, we may have to go down the Yossi Benayoun route.

Nevertheless, while Willian is a polarising figure among the Blues’ support, there’s no disputing his credentials with the club. Two Premier League crowns, one FA Cup, one Carabao Cup and one Europa League title makes for pretty good reading, with his work-rate and endeavour largely responsible for a number of those successes. 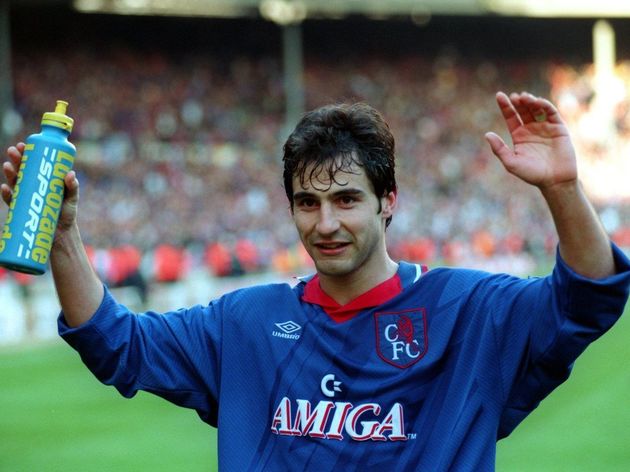 ​One of Glenn Hoddle’s first signings as Chelsea manager, Gavin Peacock was bought for £1.5m from Newcastle in 1993.

It was during the club’s FA Cup run in the 1993/94 season that Peacock truly shone in a Chelsea shirt. He played in all seven of the club’s matches on their way to the final, scoring against Barnet in a 4-0 replay victory, one in each game as the Blues beat Sheffield Wednesday at the second attempt, the goal which saw off Wolves in the quarter-final and a brace at Wembley as Chelsea beat Luton 2-0 in the semi-final.

Sadly, he couldn’t repeat those heroics in the final, as Chelsea were tonked 4-0 by Manchester United. ​David Speedie had an impressive five years at Chelsea, during which time he formed a prolific strike partnership with club legend Kerry Dixon.

Fun fact – in 1986, Speedie became the first senior player since Sir Geoff Hurst in the 1966 World Cup final to score a hat-trick at Wembley, as Chelsea defeated Manchester City 5–4 in the Full Members Cup final.

The Scotsman scored 47 goals for the Blues in 162 appearances, helping the club win the Second Division title in 1984, as well as the above mentioned Full Members Cup in 1986. Chelsea signed the legendary Welsh forward in 1995 from Manchester United for £1m. In truth, Hughes’ best days were probably behind him by that point, but that didn’t stop him making his mark at Chelsea as he enjoyed some memorable moments at Stamford Bridge.

Hughes put in a match-winning performance against Wimbledon in the 1997 FA Cup semi-final en route to Chelsea winning the trophy. Perhaps even more memorably, Hughes scored the decisive goal against Vicenza in the UEFA Cup Winners’ Cup semi-final in 1998, as Chelsea overturned a two goal deficit in the tie. The Blues went on to win the trophy after defeating Stuttgart in the final.

All in all, Hughes won the FA Cup, League Cup and the UEFA Cup Winners’ Cup with the Blues during his three years at the club. He also won the Chelsea Player of the Year award in 1996/97. ​As we get down to the final few players of this list, we approach those who can be considered true Chelsea legends. And where better to start than Chelsea’s number 10 on the greatest night in their history?

He may have only spent two and a half years at the club, but no-one can deny Juan Mata’s place as one of Chelsea’s greatest ever players. He was the club’s Player of the Year in both of his two full seasons (2011/12, 2012/13), demonstrating how important he was to the side.

As alluded to above, Mata is the only number 10 in Chelsea history to have won the European Cup with the club. The 2012 Chelsea team was an ageing one, and Mata was the man who gave the team creativity that was otherwise lacking it. When you remember that he was flanked by Ryan Bertrand and Salomon Kalou on the night, you appreciate even more what he accomplished. Yes, his penalty kick was saved but that should be overlooked in the grand scheme of things.

Oscar’s arrival signalled a premature end to his time at the club, but a tremendous reception always awaits him when he returns. Arguably the most gifted English footballer of the last twenty years, Joe Cole had the lot – flair, creativity, vision, confidence.

Cole was one of the first signings of the Roman revolution, and wore the number 10 shirt for seven seasons. During his time with the Blues, Cole won three Premier League titles, two FA Cups, a League Cup, and played in that ill-fated Champions League Final against Manchester United in 2008.

A truly wonderful player to watch, Cole played 281 games for Chelsea, winning the club’s Player of the Year award during 2007/08. The greatest player that has ever – or will ever – wear a Chelsea shirt. Yes, during his first two seasons at the club, Hazard played in the number 17 shirt. But please, let’s not get bogged down in the fine print. Frankly, Hazard could’ve worn the number 99 shirt for Chelsea and he’d still be top of this, or any other, list.

Sure, he may not have won as many medals at the club as the likes of John Terry, Didier Drogba or Frank Lampard. Each of those men may indeed hold a stronger claim to being bigger Chelsea ‘legends’, but if you’re looking for the club’s greatest ever player – look no further.

Hazard made 352 appearances in Chelsea blue, scoring 110 goals, but his brilliance goes far beyond his statistics. A truly mesmerising player, he had speed, flair, balance and unrivalled agility, showing time and time again what he could do on the big stage.

In terms of trophies, he did pretty well – scooping two Premier League titles, two Europa Leagues, one FA Cup and one Carabao Cup.

Jamie Spencer - April 10, 2020 0
​Premier League clubs have been tipped to consider the use of ‘coronavirus testing machines’ that would allow players to be checked for COVID-19 daily...

Amreen - April 10, 2020 0
​​Premier League clubs are set to receive an advance on the prize money they were due to collect at the end of the season in a...

UK Government Reportedly Hit Out at Tottenham & Jose Mourinho for Putting Lives At...

Amreen - April 10, 2020 0
​The British government has reportedly accused Jose Mourinho and some of his ​Tottenham players of 'endangering people's lives' after they breached coronavirus lockdown guidelines. According to the ​Daily Mail,...

12 of the Most Epic Advertisements Starring Famous Footballers