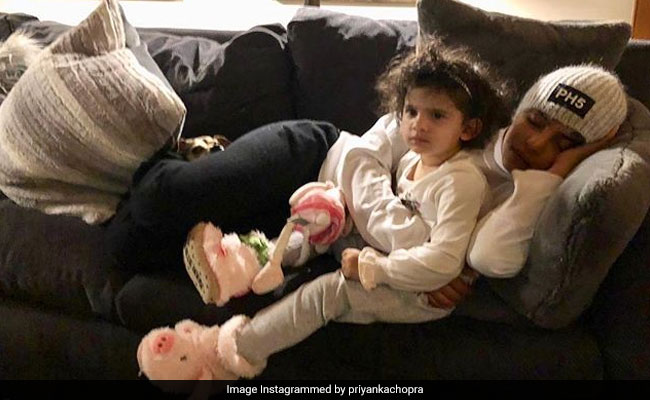 Priyanka Chopra, who is currently in California with her family, delighted her Instafam with a million dollar picture of herself with her cute little niece Krishna Sky on Tuesday. In the picture, Priyanka can be seen fast asleep on a couch while little Krishna can be seen watching over Elsa and Anna. “As Krishna Sky watches over Elsa and Anna. Mimi masi sleeps, again,” Priyanka Chopra captioned the picture. The photo shared by Priyanka has over four lakh likes in less in three hours. The photo has been liked by Riddhima Kapoor, Bhumi Pednekar and Denise and Kevin Jonas. “Super cute,” is the general sentiment on Instagram.

Newlyweds Priyanka Chopra and Nick Jonas are currently in California not just with the Jonas family but the formers mother Madhu Chopra is also with her. On Sunday, Nick Jonas had shared a photo from the snow-capped Mammoth Lakes in California where the couple enjoyed the Super Bowl with their respective families. Here are photos and videos from Priyanka Chopra and Nick Jonas’s well-spent Sunday.