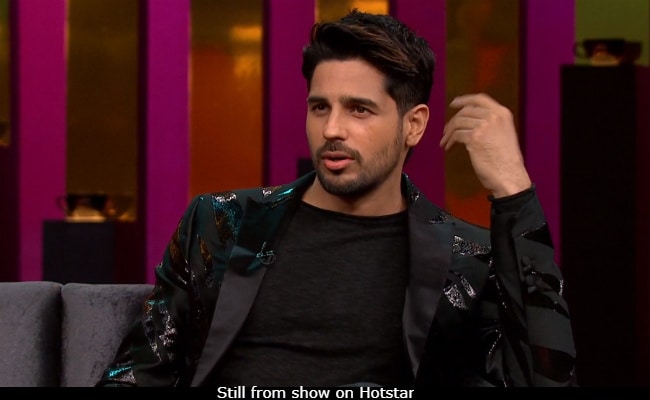 Sidharth Malhotra did not shy away from answering questions about his unsuccessful films, break-up with former girlfriend Alia Bhatt and much more on a recent episode of Koffee With Karan. Show host Karan Johar asked Sidharth if he continues to share a cordial rapport with his first ever heroine, when he said while there’s no awkwardness between the two, they haven’t really caught up as such after the split: “I don’t think it’s bitter. We haven’t really met after that, to be honest. And it’s civil. It’s been a while and it happens… just like any other relationship. I have known her for much longer. I did know her much before, even before we were dating. So, it’s not like we met as a particular boyfriend-girlfriend thing. I think it’ll remain. It’s just a matter of us coming back… whether it’s work or just socialising.”

Karan then enquired if Alia and Sidharth’s shared history would be a considering factor in his career choices, when the actor said: “I don’t think so. There’s been enough time. There is a reason that two people decide not to be together. There were lots of ups and downs and I tend to look at it when you take yourself away from a particular situation or an experience, you only think of the good after the event or relationship. So, all good memories and happy memories and I’m happy.”

Recollecting old memories, Sidharth said that he filmed his first ever sequence with Alia for Student Of The Year: “I’ve given my first ever shot with her. And we were doing that Radha song and that twirl I had to do, it was crazy! That’s got so much history.”

Sidharth Malhotra, who joined the industry from a non-filmy background, debuted in Bollywood with 2012’s Student Of The Year, which also marked the Bollywood debuts of Alia Bhatt and Varun Dhawan. It’s reportedly around that time that Sidharth and Alia started dating. The former couple even attended showbiz parties together till sometime in 2017, when it was reported that Sidharth’s apparent closeness to Jacqueline Fernandez eventually led to the couple’s break-up.

On Koffee With Karan, Sidharth also dismissed rumours that he ever dated Jacqueline and said: “We were never dating. I think we just enjoyed being friends and hanging out.” Alia Bhatt is currently said to be dating Ranbir Kapoor.

Sidharth Malhotra was on Koffee With Karan with Aditya Roy Kapur. On the work front, Sidharth has Jabariya Jodi with Parineeti Chopra in the line-up. Alia Bhatt is currently looking forward to the release of Zoya Akhtar’s Gully Boy, in which she co-stars with Ranveer Singh. She also has Kalank and Ayan Mukerji’s Brahmastra in the pipeline.