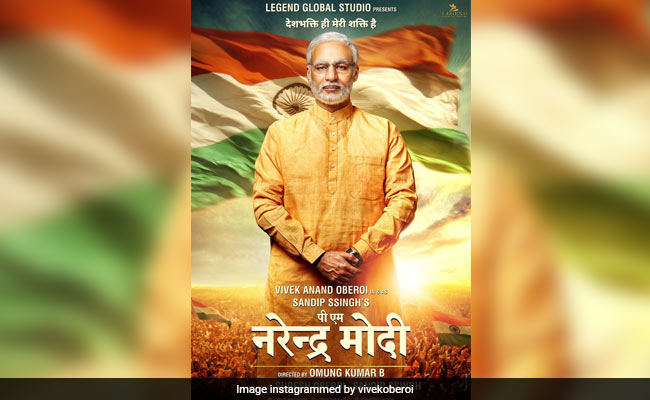 The first poster of the Prime Minister Narendra Modi biopic was released today, days after it was announced that Bollywood actor Vivek Oberoi would be essaying the role of PM Modi in the movie. The movie is titled “PM Narendra Modi“.

The poster features Vivek Oberoi with prosthetics, make up and grey hair and beard wearing a kurta. The background has India’s flag against the backdrop of sunrise.

The first poster of “PM Narendra Modi” was unveiled by Maharashtra Chief Minister Devendra Fadnavis today in Mumbai. At the poster launch of the film, Vivek Oberoi said he hopes to becomes a better person by the end of the shoot and called himself a fan of PM Modi.

Vivek Oberoi had announced yesterday the time of release of the poster on Twitter. He shared the poster thrice with captions in various languages. The movie is going to be released in 23 languages across India.

Devendra Fadnavis shared pictures from the launch and said the “film is set to create history.” He also showered praises on the prime minister calling him a “world leader” and “rajyogi“.

This is film is set to create history today with the poster launch of a film based on the life of world leader born in India, a RajYogi in true sense!
Congratulations to this team who is going to be a winning team, eventually ! pic.twitter.com/ydgyRAwD96

The director of the movie is Omung Kumar, who had earlier directed Mary Kom and Sarbjit. Mary Kom was a sports biopic on the life of Olympian-boxer Mary Kom. Sarbjit was also based on the real life story of an Indian who was sentenced to death by the Pakistan Supreme Court after he accidentally crossed the border. Bollywood trade analyst had on January 4 shared the news of Mr Oberoi playing the prime minister’s role. Filming will start in mid-January, Mr Adarsh had announced. Details about the other actors in the film have not been revealed as of now.

The announcement of this movie comes amid much controversy surrounding the Anupam Kher-starrer “The Accidental Prime Minister“. Various cases have been filed against the movie and the film has stirred strong political reactions in the election season. Many people have protested against the film saying the film gives a dim view of the Congress led by the Gandhi family.