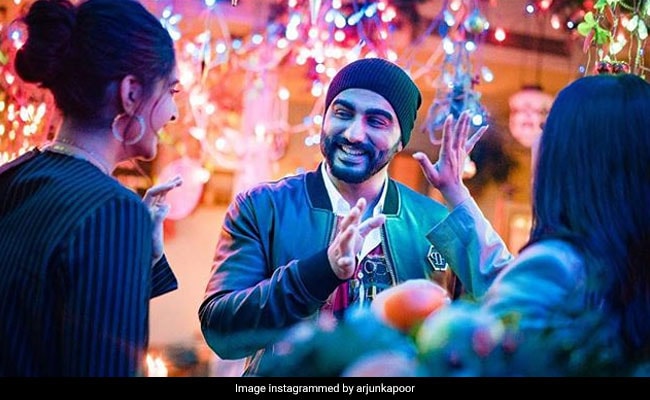 Arjun Kapoor delighted his Instafam with a million dollar throwback picture featuring himself with his sister Sonam Kapoor. The photo shared by Arjun appears to be from Anil Kapoor’s 62nd birthday bash last year. “Haaso, jiyo, muskurao because it’s Sunday (and your sister is laughing with you),” Arjun Kapoor captioned the Instagram photo. Arjun Kapoor is all smiles in the picture while Sonam has her back against the camera. The photo has close one lakh likes in less than an hour. The post has been liked by Sonam Kapoor, Rhea Kapoor, Ayushmann Khurrana, Abhishek Bachchan and Tiger Shroff. “Best brother”, “sibling goals” and “jhakaas“, were some of the comments which popped on the post.

Arjun Kapoor often delights his Instafam with photos from his family photo archive. One can make an entire album full of old pictures from Arjun Kapoor’s Instagram. Be it on Sonam or Anshula’s birthday, to celebrating Father’s Day or just remembering his late mother Mona Shourie Kapoor – Arjun has always resorted to blasts from the past.

Take a look at some of the throwback pictures here:

On the work front, Arjun Kapoor was last seen in Namaste England opposite Parineeti chopra. The Vipil Amrutlal Shah-directed film failed to make its mark at the box office. He is currently working on Ashutosh Gowariker’s period drama Panipat, which also stars Kriti Sanon. Arjun also has India’s Most Wanted and Sandeep Air Pinky Faraar in the pipeline.