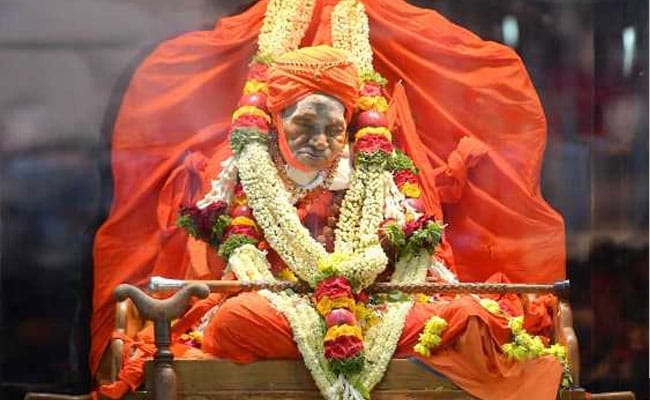 The funeral of Dr Shivakumara Swami, head seer of the Sree Siddaganga Mutt in Karnataka’s Tumakuru, was conducted with state honours on the temple premises this evening. Thousands attended the funeral, including central and state ministers. He died after a prolonged illness at the age of 111 on Monday.

Dr Shivakumara Swami — popularly known as the “Walking God” — was revered by many in the state, and several politicians cutting across party lines arrived at the mutt to pay their respects after his death. While Karnataka Chief Minister HD Kumaraswamy announced three-day mourning across the state in solidarity with the seer, Prime Minister Narendra Modi said he was a living example of somebody who lived for the poor and downtrodden in the society.

“His holiness Dr Sree Sree Sree Sivakumara Swamigalu lived for the people, especially the poor and vulnerable. He devoted himself towards alleviating ills like poverty, hunger and social injustice. Prayers and solidarity with his countless devotees spread all across the world,” PM Modi tweeted yesterday.

The Prime Minister also said that Dr Shivakumara Swami used to “treat him like a son” every time he visited his mutt. Although PM Modi was not able to attend the funeral, Union Ministers DV Sadananda Gowda and Nirmala Sitharaman represented him at the funeral.

The seer, considered one of the most respected religious and social practitioners of the Lingayat-Veerashaiva faith, had been on ventilator support for 15 days before he finally breathed his last. Doctors were treating him for a lung infection he developed after a surgical procedure in December.

Meanwhile, thousands of devotees and religious personalities thronged the Sree Siddaganga Mutt through the day to pay tribute to their spiritual leader. The South Western Railway operated special trains from Bengaluru to Tumakuru for the purpose, and the national flag flew at half-staff at government institutions across the state.