Actress Aishwarya Rai Bachchan wished her husband Abhishek on his 43rd birthday with the sweetest post. “Always my baby. Happy, happy birthday, baby,” read Aishwarya’s caption for the Instagram post, in which one of the pictures features Abhishek as a baby and the other is photo of the couple together. The Instagram post has got close to 2.3 likes in just a few hours and in the comments sections, birthday wishes are pouring in for Abhishek from his colleagues and fans. Aishwarya Rai Bachchan and Abhishek Bachchan married in April 2007 and in 2011, the couple welcomed their daughter Aaradhya. Dear Abhishek, here’s your birthday wish from Aishwarya. Take a look.

“Wishing you the brightest of days. Happiness always,” superstar Amitabh Bachchan wrote for his son Abhishek on his blog.

Meanwhile, his sister Shweta Bachchan Nanda shared an adorable picture of herself with Abhishek from their childhood. “Love you beyond words and reason,” she wrote, adding a heart emoticon.

On her Instagram stories, Shweta treated us to the birthday post her daughter Navya Naveli shared for Abhishek. The picture appears to be taken at a stadium and Abhishek and Navya have been photographed from the back. “Happy birthday best friend,” read Navya’s caption. 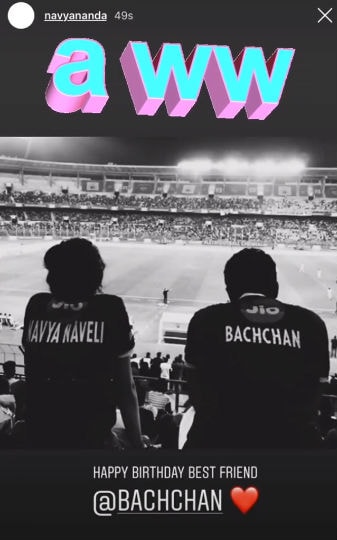