As the Central Industrial Security Force (CISF) celebrates its Golden Jubilee or 50th year, it has not been included in the marching contingent at the Republic Day parade this year. The stunning exclusion has seeded a row between the ministries of defence and home affairs. Sources in the home ministry say the defence ministry refused to allow the participation of the CISF because it said only three paramilitary forces could participate. The CISF reportedly was “too late” with its request for participation.

On a request from CISF Director General Rajesh Ranjan, the home ministry reportedly raised it with the defence ministry. “As the defence ministry is the nodal ministry (for the Republic Day celebrations) we had requested them to allow four paramilitary contingents to participate this year, but they did not agree,” said a senior official.

Officials say the defence ministry also took a month to reply, giving the home ministry no time to ask another participating contingent to opt out to make way for the CISF, given it is a special year. 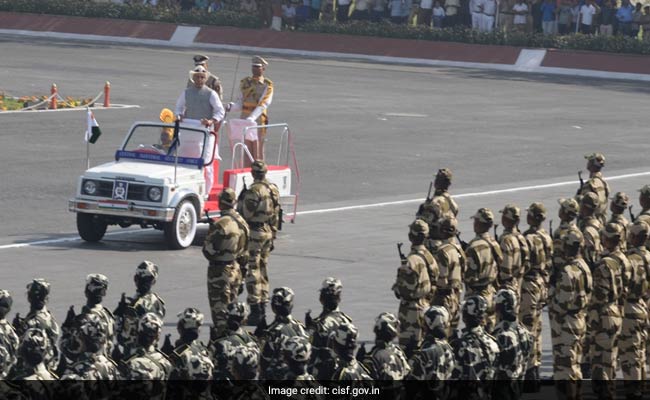 This year, the Delhi Police, Assam Rifles and Rapid Action Force are participating

“Paramilitary and auxiliary forces are one category and in rotation it was our chance, but the defence ministry did not give us permission,” CISF spokesperson Hemender Singh told NDTV.

Every year, three foot contingents of the paramilitary participate in the parade that marches down the ceremonial road Rajpath, watched by the President, Prime Minister, dignitaries and hundreds of people. This year, the Delhi Police, Assam Rifles and Rapid Action Force are participating.

A few years back, the parade was pared down and trimmed so that there were fewer contingents and tableaux. But each year, paramilitary forces are rotated, so everyone gets a turn.

The CISF had participated last in 2017 and had been named the best marching contingent.

The move has let down the morale of the only paramilitary force that earns revenue for the government by providing security at airports, government offices and even sensitive private installations for a fee.

“The defence ministry could have made an exception this time but did not. We wrote to them as soon as the list was out, but they took almost a month to reply and by then it was too late,” explains a senior home ministry officer.

The defence ministry blamed the CISF. “They were aware that this is their golden jubilee year; they should have acted on time,” said an officer.

This year, 17 foot contingents are participating in the parade, which includes the Army, Navy, Air Force, paramilitary and retired personnel.

The Border Security Force’s camel contingent and camel-mounted band (registered in world record book) and an all-women group will march this year on January 26.

The women contingent is special as some of them are family members of soldiers who died in the line of duty.