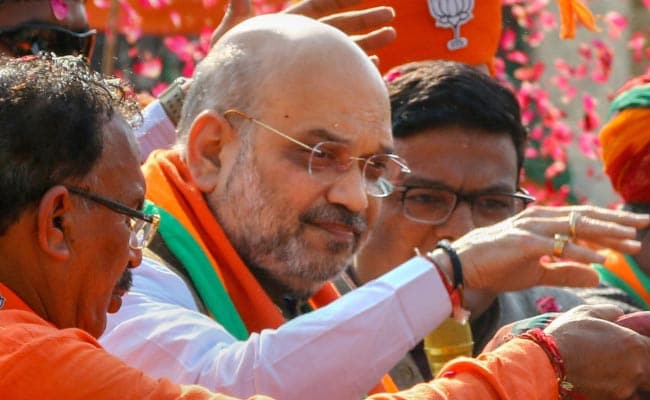 Mr Banerjee, MP, said that people of India are looking up to TMC supremo and West Bengal Chief Minister Mamata Banerjee to lead the nation after 2019.

He questioned why Amit Shah didn’t have the guts to conduct a press conference on Thursday when Alok Verma was still CBI chief.

“Amit Shah is saying his next target is West Bengal. I want to challenge him if he has the guts he should contest elections from any of the 42 Lok Sabha seats in West Bengal. I would ensure that he loses the election,” Abhishek said while addressing a rally in North Kolkata.

In an apparent reference to switchover of party MP Soumitra Khan to BJP, Abhishek Banerjee said that those who have been rejected by the TMC are being treated as “gems” in the BJP.

“Those who have been rejected by TMC, who are basically not but garbage in our party, all of a sudden have become gems in BJP. This is the condition of BJP in Bengal. I can assure all of you that BJP won’t win even a single seat in Bengal,” he said.

The BJP leadership has earmarked Bengal as a priority state and it’s party president Amit Shah has set a target of winning 22 of the 42 Lok Sabha seats in Bengal.

Amit Shah was conducting a press conference on Friday. If he had the guts he should have conducted it on Thursday when Alok Verma was still CBI chief, Mr Banerjee said in an apparent reference to uncomfortable questions that have been raised against BJP over the Rafale fighter jet deal.

Mr Banerjee, who is also Mamata Banerjee’s nephew, said the countdown for the “anti people” Modi government has begun.

“Mamata Banerjee is the leading light that the people of India are looking at to oust the Modi government at the centre,” he said.

Mocking the BJP’s defeat in the three Hindi heartland states, Abhishek Banerjee said the BJP for last four-and-a-half years gave used the CBI and ED as a tool to silence political opponents and detractors but has failed to do so with TMC.

“The TMC is the only political party which has not surrendered before the intimidation tactics of BJP. The more they threatened us with CBI and ED the stronger we emerged by defeating all threats and intimidation,” he said.

TMC party leader in Lok Sabha Sudip Bandopadhyay gave the call to ensure that the next government at the centre is formed under the leadership Mamata Banerjee.

Mr Bandopadhyay criticised Prime Minister Narendra Modi for giving nominal time to the parliament and not delivering a single speech in the winter session of the Parliament.

“We have never witnessed such an incident where the Prime Minister comes to parliament just for few minutes and doesn’t deliver a single speech on any of the issues. Where are we heading to? The people of this country should take a call in the next Lok Sabha polls,” he said.