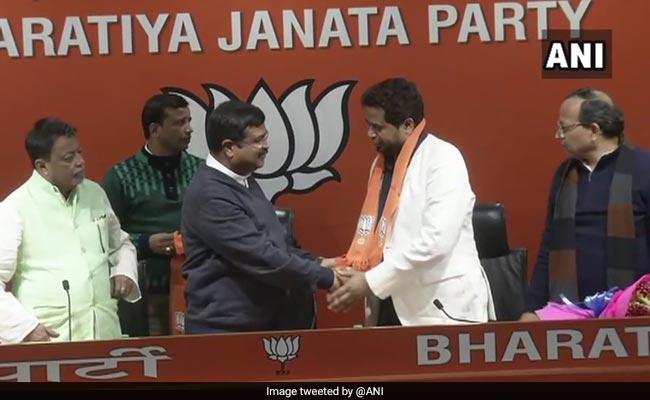 Early in the first innings of 2019, the Trinamool Congress today lost two wickets – two sitting lawmakers – one expelled after he joined the BJP, the other before he could jump ship.

Anupam Hazra, Bolpur lawmaker, has not joined the BJP yet but all sources point in that direction.

Saumitra Khan, Bishnupur lawmaker, however, was signaling his disaffection. Today, he drove in the stake, saying, “No democracy in Trinamool. It is now a “pishi-bhaipo” party (an “aunt and nephew” party)” – a direct reference to Trinamool chairperson Mamata Banerjee and her nephew Abhishek Banerjee.

Is the Trinamool in shock? Not really. Abhishek Banerjee, the nephew and Trinamool MP and president of Trinamool Yuva, was scathing in his attack.

“Why didn’t Saumitra Khan change parties earlier, why so late? The people BJP is trying to grab, I dare them to stand for election and win. BJP will lose the two seats they have in Bengal today. Trinamool will get 42 on 42,” Mr Banerjee said and demanded Mr Khan explain how he had spent his MPLAD (Members of Parliament Local Area Development Scheme) funds.

“Oiling is the best policy for existence in politics,” Mr Khan wrote on Facebook on 20 December. He is a loyalist of Mukul Roy – former Trinamool Rajya Sabha MP who joined the BJP in November 2017. Mr Roy was present when Mr Khan formally joined BJP at the party’s headquarters in New Delhi.

Dharmendra Pradhan, BJP leader and minister who presided over the “joining”, said, “In the 2019 elections, Mr Narendra Modi’s strongest fortress will be the east. This is one of many small steps in that direction.” Amit Shah has famously set a target for Bengal BJP: 22 seats out of the state’s tally of 42.

Bengal BJP chief Dilip Ghosh said, “Today people want to join the BJP. So we have kept our doors open. You have to wait and watch and see how many more come to us. They may be Mukul Roy loyalists (like Khan) and they may not.”

Even before the ink dried on Saumitra Khan’s signing, the Trinamool announced his expulsion and that of its MP from Bolpur, Anupam Hazra for anti-party activities. Mr Hazra’s exit was not a surprise to many. He was sidelined soon after he was elected in 2014 and was not part of the coterie of Birbhum district Trinamool strongman Anubrata Mondal.

“I thought my only anti- party activity was smoking,” Mr Hazra said when word of his expulsion reached him. “I stopped that a year ago. So why have I been expelled?” he wondered.

While both the wickets that Trinamool lost today have been labeled bad eggs, their exit means the Trinamool now has 32 lawmakers in Lok Sabha.

Should Mamata Banerjee worry? Abhishek Banerjee is dismissive. “If elections are held tomorrow, we will get 42 of 42 seats,” he said. Kolkata mayor, urban affairs minister and senior Trinamool leader Firhad Hakim added, “Saumitra Khan was MP because Mamata’s hand was over his head, I am Firhad Hakim because she has blessed me. If that hand of blessing is removed, we are all zero.”

What is interesting is both the expelled leaders are relatively young: Mr Khan, 38, and known to have a strong young following, and Mr Hazra, 36.