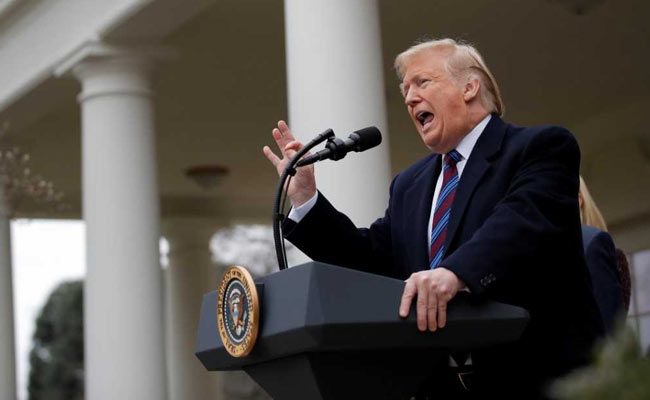 President Donald Trump will tell Americans in a primetime speech Tuesday that the US-Mexico border is in “crisis” and Congress must approve construction of a wall to end a government shutdown now in its 18th day.

After weeks of lashing out at Democratic opponents, mostly via Twitter and impromptu press conferences, Trump will deploy the presidency’s biggest PR gun: a formal address to the nation at 9:00 pm (0200 GMT) on live television from the White House Oval Office.

Vice President Mike Pence told ABC television that Trump would lay out the “real humanitarian and security crisis at our southern border.”

But the White House remained coy about whether Trump will declare a national emergency allowing him to bypass Congress and order his controversial wall project to go ahead using military resources — a move that would send already heated political temperatures to boiling point.

“He’s not saying yes or no,” top advisor Kellyanne Conway told journalists at the White House a few hours before the speech was due. He’s “considering it,” she added.

Trump wants $5.7 billion to build a wall or fence along the Mexican border. Democrats in Congress have refused, saying he is hyping up immigration issues to appeal to his right-wing base.

In retaliation, Trump has refused to sign off on a broader spending bill, leaving some 800,000 federal employees and many more contractors without pay.

That partial government shutdown has brought Washington’s partisan dysfunction into ordinary Americans’ homes across the country, raising the stakes for lawmakers who must face their voters as the chaos drags on.

The Oval Office has witnessed many historic announcements, ranging from George W. Bush’s reaction to the 9/11 attacks to John F. Kennedy’s televised appearance at the height of the Cuban missile crisis.

Trump’s gambit is that the solemn setting will allow him to regain the momentum on the Mexico wall issue that helped him get elected in 2016 and has become an obsessive goal for supporters.

He will follow up with a rare trip to the Mexico border itself on Thursday.

But with many Americans far from sold on Trump’s lurid claims about illegal immigrants, criminals and terrorists overwhelming the border, the speech faces its own high barrier: credibility.

“I think the best thing the president can do for the Republican Party is to make a persuasive case of why he wants more money, of why it’s a crisis,” Republican Senator Lindsey Graham, a close Trump ally, told reporters.

“The better he does with that, the better it helps us to get to where we need to go.”

Democrats, who ended the Trump presidency’s dominance of domestic politics when they seized the House of Representatives from his Republicans in November, cried foul before a word was spoken.

“If his past statements are an indication, (the speech) will be full of malice and misinformation,” House Speaker Nancy Pelosi and the senior Democrat in the Senate, Chuck Schumer, said in a statement.

The Democratic leaders were due to give on-air rebuttals immediately after Trump’s speech.

The big question was whether Trump would use the occasion to declare a national emergency at the border, giving himself considerable new powers and sidestepping Congress’s control of the purse strings.

Some argue that this is a way out of the impasse, as it could free Trump to build the wall and therefore to lift his blocking of the wider government funding.

Democrats have said the move would at a minimum mean presidential overreach, sparking court challenges to block the powers. But even if blocked, Trump could claim to his base that he had done what he could, while ending the damaging government shutdown.

Some Republicans have voiced doubts about the tactic, with Senator John Boozman telling AFP there was “some controversy” over Trump’s authority to declare an emergency.

“I think it would probably end up in a lawsuit, so I’m not sure how productive it would be,” Senator John Cornyn said.

While political junkies were fixated on the policy issues in the standoff, others took a rather less decorous view of the proceedings.

Betting site bookmaker.eu was offering odds for wagers on whether Trump would lie during his speech, declare a national emergency or end the shutdown by January 18.

And Stormy Daniels, the pornographic film performer and stripper famous for claiming she was paid off to keep quiet about an affair with Trump, proposed another way to keep entertained.

“If you’re looking for anything even remotely worth watching tonight at 9pm EST, I will be folding laundry in my underwear for 8 minutes on Instagram live.”