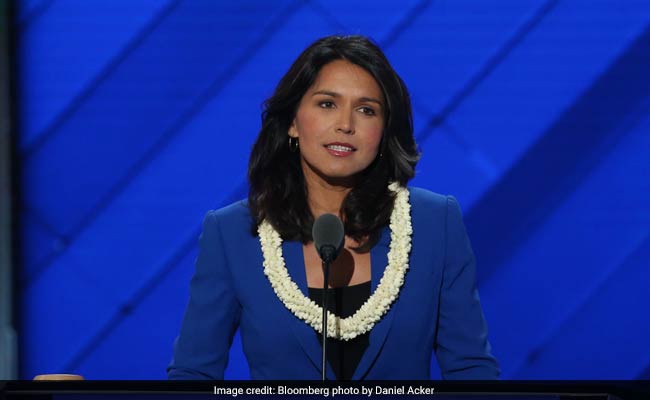 Rep. Tulsi Gabbard, a Democrat from Hawaii, announced on a CNN show set to air Saturday that she will seek the 2020 Democratic nomination for president.

“I have decided to run and will be making a formal announcement within the next week,” CNN quoted Gabbard as saying in a pretaped interview for The Van Jones Show.

Gabbard listed criminal justice reform, climate change and health care as issues that she was interested in solving.

“There is one main issue that is central to the rest, and that is the issue of war and peace,” Gabbard said, according to CNN. “I look forward to being able to get into this and to talk about it in depth when we make our announcement.”

Gabbard, 37, arrived in Congress six years ago after an underdog campaign for Hawaii’s mostly rural 2nd District. She had been a force in Hawaii politics for years, making news by becoming the youngest person – just 21 at the time – ever elected to the state legislature. She made news again when she left the seat to serve in Iraq with the Army National Guard.

“I stepped down from the legislature where I served, and headed to a war zone,” Gabbard recalled at the 2012 Democratic National Convention. “As a combat veteran, I know the costs of war.”

Gabbard won the 2012 race with the support of veterans’ groups and by Emily’s List, which supports female candidates who support abortion rights, and arrived in Congress as a star – a female Iraq War veteran and the first Hindu woman to serve in the body. She quickly established herself as a voice for her party’s left on domestic issues and a critic of foreign military intervention. By the middle of her second term, she was getting asked if she might one day run for president.

The congresswoman also made surprising allies on the right, appearing on Fox News and at events organized by the American Enterprise Institute to criticize the Obama administration’s foreign policy in ways that raised some Democratic eyebrows.

“There seems to really be a lack of a coherent strategy with regards to how we, as the United States, are dealing with Iran, as we look at this threat of a nuclear-armed Iran,” Gabbard said in one Fox News appearance in 2015.

Gabbard would eventually support the Iran nuclear deal, while becoming one of few Democrats to back legislation making it harder for Syrian refugees to enter the United States.

That same year, as a vice chair of the Democratic National Committee, Gabbard criticized the party’s handling of the presidential primary. She quit the DNC in early 2016 to endorse Sen. Bernie Sanders, I-Vt., becoming a sought-after surrogate in the primaries.

But after the election, some on the left began to view Gabbard more skeptically. She was one of a handful of Democrats who met with Trump during the presidential transition, amid speculation that she could become UN ambassador or secretary of state. That led to more critical attention to Gabbard’s foreign policy views, though a few months into the Trump administration, she rejected praise from the president and his allies.

“Trump’s so-called populism has been a fraud,” Gabbard said in August 2017.

While Gabbard is wildly popular with many Sanders supporters – she was the only member of Congress to join him at a post-election conference in Vermont – she’s viewed skeptically on much of the left. In her stint in Hawaii politics, Gabbard opposed the state’s legalization of civil unions for same-sex couples, saying at one forum that Democrats “should be representing the views of the people, not a small number of homosexual extremists.”

Gabbard has recanted those views, telling voters at an early December meeting in New Hampshire that she had changed after her service in Iraq. That meeting offered a preview of Gabbard’s potential pitch for 2020, with the congresswoman decrying poverty and war and calling for a politics that focused on what people had in common.

“There is no force more powerful than love,” Gabbard said. “When we start from this foundation of love, inspired by this love, then we can truly have that strength and that power to be able to take on the tough challenges that are before us.”