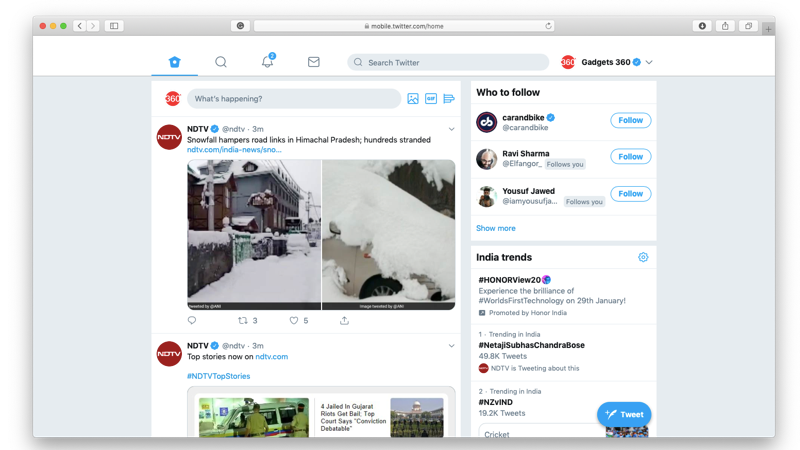 Twitter has now started rolling out a new design for the Web that offers a simpler, cleaner look. The social networking giant has opted for a two-column view that focuses more on the user’s timeline, user recommendations, and trends. The redesign is gradually being rolled out with users being asked to opt-in to view the updates. The fresh design brings subtle, yet welcome changes to Twitter for the Web. The company had started teasing the new design back in 2018.

The new Twitter Web redesign feels somewhat similar to Twitter’s mobile Web user interface. However, on the Web, you can make use of keyboard shortcuts to navigate across the interface. On the new tweet window, there’s an emoji button that can let you quickly add your favourite emojis.

On the right-hand side, you’ll find user recommendations and an updated trending section. Trending topics are a major attraction for most Twitter users who like to join in and see what’s new. The redesign also brings an advanced search that promises to make it easier to locate tweets you want from all the noise.

Twitter’s redesign for the Web doesn’t bring any major new features though. You won’t find an option to edit tweets or the recently revealed chat bubbles. In essence, Twitter is bringing a more mobile-like interface for its Web users.

The company tweeted about the redesign being rolled out to a select few users. Once the new design is available for your account, you’ll receive an option to opt-in. So far a very small number of users are seeing the redesign so you may have to wait a little while for this.

In addition, Twitter also seems to be working on improving the dark mode on the Web and its mobile apps. The company had rolled out a dark mode titled ‘night mode’ back in 2016, but it doesn’t use a true black colour. Twitter CEO Jack Dorsey confirmed the move by responding to a user’s request for a black dark mode by saying, “Will fix.”

How to Clean Up Your Digital Life in 2019

Amazon Bans Sellers From Using FedEx for Some Prime Deliveries in...