​Borussia Dortmund carved out the majority of the clear cut chances in their Champions League group stage opener against Barcelona, but it was a familiar face in Marc-André ter Stegen who gave the visitors the best possible chance to take something from the game.

The 27-year-old already proved why he is considered as one of the best goalkeepers on the planet by keeping out Marcu Reus in the first-half, but it was his battle with Dortmund’s captain from 12 yards which really stole the show at the Westfalenstadion. 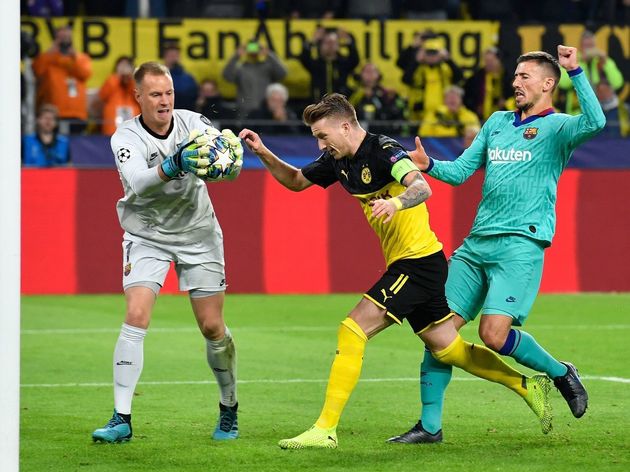 After Nélson Semedo brought down Jadon Sancho inside the box, Reus stepped up and fired a powerful shot which was destined to nestle in the bottom corner of the net.

But ter Stegen leapt to get a strong hand on the ball, while the former Gladbach star even got up to collect the rebound before any other player.

The absolute calmness with which Ter Stegen gets up and grabs that ball is superhuman. Mad mad mad cool head.

How was Ter Stegen that nonchalant on the second save after saving the penalty like he was picking groceries at the store and not plucking the ball just metres from the line?

Once again, Marc-André Ter Stegen proves why he’s the best goalkeeper in football.

​​Ter Stegen’s performance back in Germany unsurprisingly prompted another conversation about who really is Die Mannschaft’s best goalkeeper.

National team manager Joachim Löw still seems to prefer Bayern Munich’s Manuel Neuer, but the hordes of fans on social media were eager to kick-start another debate – even if at this point the answer seems perfectly clear.

Ter Stegen coming to Germany and showing Neuer he’s the present and future as the best goalkeeper in his homeland.

Of course Ter Stegen is brilliant, nobody can deny that but why would Neuer cry after one game when he’s literally got Ter Stegen on strings even in a press?

Ter Stegen has a good game but, all those ridiculous Barca fans comments about Neuer just don’t give me a chance to appreciate his talent.

Cannot believe Neuer has been starting over Ter Stegen for Germany.

How is Neuer benching Ter Stegen in Germany??!!!!!

​​Did that clear things up as far as public opinion on Neuer or ter Stegen goes?

No, it didn’t for us either.

But whichever side of the fence you sit on, Neuer’s time with the national team is coming to an end and Barcelona’s ter Stegen is inevitably at the front of the queue to take up the mantle as Germany’s number one goalkeeper.

Christian Pulisic: The Perfect Replacement for Eden Hazard at Chelsea