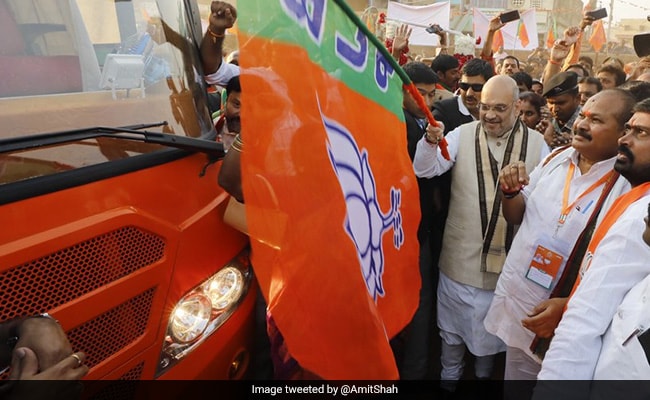 In a blistering attack on Andhra Pradesh Chief Minister N Chandrababu Naidu, BJP president Amit Shah called him a “U-turn Chief Minister” and announced that he will never be allowed into the BJP-led alliance again.

The Telugu Desam Party (TDP) chief changes his stand quite frequently and has a habit of switching parties, Mr Shah said.

“As soon as the Atal Bihari Vajpayee government came to power, Chandrababu Naidu joined the NDA and jumped the ship in 2004 when the NDA lost and the Congress formed the government. In Narendra Modi’s popularity, Chandrababu Naidu again saw an opportunity and returned to the NDA in 2014,” Mr Shah said to explain his point.

The BJP chief said he is confident that once the counting for 2019 national elections is over and the BJP forms the government again, Chandrababu Naidu will make all efforts to join the NDA.

“Let me tell you that this time, the doors for him have been closed forever. He has misguided the people of the state. It is appropriate to call Chandrababu Naidu a U-turn chief minister,” Mr Shah said during a rally in Andhra Pradesh.

The Andhra Pradesh chief minister said he was surprised by Amit Shah’s arrogance. “Who has asked him to open the door? Why is he talking like this? I totally condemn this attitude and arrogance,” Mr Naidu told news agency ANI.

Chandrababu Naidu had started his political innings with the Congress, but he always switched loyalties to remain in power, Amit Shah said.

“He later joined the TDP formed by his father-in-law NT Rama Rao. When he got the opportunity, he betrayed NTR who had promoted him and captured power and the entire party,” said Mr Shah.

After wandering for about a decade, when he realised he can’t do much on his own, he came to the NDA, he said and added, “Now that he has left the NDA, he making allegations against Modiji. He has joined hands with the Congress which had insulted the Telugu people and did injustice to Andhra Pradesh.”

The TDP chief fought the assembly elections in Telangana in alliance with the Congress, but lost badly to K Chandrashekar Rao’s Telangana Rashtra Samithi (TRS). Both parties have decided against an alliance for the upcoming national election, but are trying to form an anti-BJP gathbandhan at the national level.

“As their alliance was wiped out in Telangana, he deserted the Congress, but is now seeking to become a leader of the so-called ‘mahagathbandhan’,” Mr Shah said.

The ruling TDP had pulled out of the NDA last year over its demand for special status for the state which was promised in 2014 when Telangana was carved out of Andhra Pradesh.

Mr Shah claimed that the Andhra chief minister snapped ties with the NDA to overcome corruption in the TDP government of the state.

“When Chandrababu Naidu felt that people were angry over the functioning of his government and the way he tried to make his son the Chief Minister, he put the entire blame on the BJP and distanced himself from us to gain their sympathy.”

Dismissing allegations that the centre did not focus on Andhra Pradesh after bifurcation, the BJP chief claimed that the centre’s support for the state’s development was 10 times more than what was provided during the Congress government in over 50 years.

“Fourteen important tasks of Andhra Reorganisation Act were to be completed in 10 years by the centre. Ten of them were completed in five years. He (Naidu) is lying that we have done nothing,” he added.

Mr Shah said that Chandrababu Naidu chose to leave the NDA that gave Rs 5,56,000 crore to the state and joined hands with the Congress which could give only Rs 1,17,000 crores.