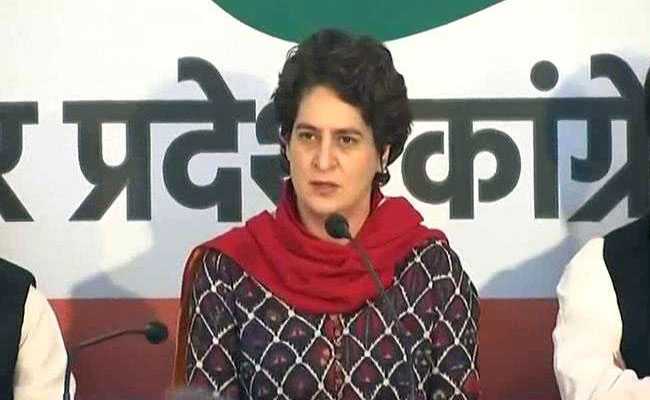 Priyanka Gandhi Vadra, the sister of Congress chief Rahul Gandhi, today condemned the deadly terror attack on CRPF personnel in Jammu and Kashmir’s Pulwama and expressed solidarity with the families of the deceased and the injured. The 47-year-old, who was expected to address her first press conference this evening a week after her induction, deferred it.

Nearly 40 personnel of the Central Reserve Police Force (CRPF) died when terrorists drove a Scorpio laden with 350 kg of explosives into their 70-vehicle convoy. Dozens are injured, many of whom are critical, doctors have said.

Appearing before the media, Priyanka Gandhi gave a short address, telling reporters that given the attack in Pulwama, “I think it is not an appropriate time for us to be having political discussions”.

“To all the families of soldiers killed in the attack — we want to tell you we are with you in this difficult hour… we stand with you shoulder to shoulder,” added Ms Gandhi Vadra, who, in a statement earlier, said she could relate to the sufferings of the affected families.

“Deepest condolences to the families of the 30 Jawans martyred in a terror attack in Pulwama, Jammu and Kashmir. I can very well understand the pain and grief of losing a loved one in the family. I want to say that not only the Congress party, but the entire country is standing shoulder to shoulder with the families of our brave soldiers. But we must also reflect and be concerned about the high number of casualties in Kashmir. We demand that this government take concrete steps to ensure such terror attacks don’t happen in the future,” her statement read.

Earlier today, Congress chief Rahul Gandhi had condemned the attack, tweeting:  “I’m deeply disturbed by the cowardly attack on a #CRPF convoy in J&K in which many of our brave CRPF men have been martyred and a large number wounded, some critically. My condolences to the families of our martyrs. I pray for the speedy recovery of the injured.”

Ms Gandhi Vadra was recently inducted into active politics as the Congress General Secretary in charge of eastern Uttar Pradesh. Ahead of the coming national elections, she is expected to rejuvenate the party in the crucial state which sends 80 lawmakers to the Lok Sabha.